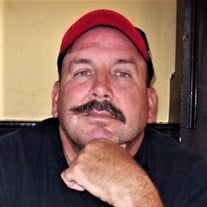 Frank William Breitbach, III, of Federalsburg, MD, passed away on Sunday, March 15, 2020. He was 61. Born on March 25, 1958, in Freeport, New York, he was the son of the late Frank William Breitbach, Jr. and Nancy J. Elsasser. He served as Quartermaster in the U.S. Navy for 21 years. He married the love of his life, Kathy Julie (Revesz) Breitbach in 1983. He enjoyed NASCAR, duck hunting, and riding his Harley. He is survived by his wife, Kathy Breitbach, his children, Frank W. Breitbach, IV, and Christopher Lee Breitbach, grandchildren, Caleb Breitbach, and Kennedy Breitbach, and sisters, Nancy Porter, and Linda Hanstein. He was preceded in death by his parents. Funeral services will be private.

The family of Frank William Breitbach, III created this Life Tributes page to make it easy to share your memories.