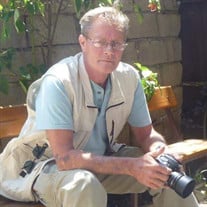 Frank Robert Deak, of Saint Michaels, MD, passed away on Friday, January 18, 2018. He was 62. He was born in Akron, OH on December 28, 1955, the son of the late Franklin Lengacher and the late Nancy Bailey Deak. He graduated from Northmont High School and later studied at Sinclair Community College. He married the love of his life, Janet Gadow, on July 19, 2003, and owned Mid- Shore Home Works. After retiring, he turned his focus to missionary work, often combining that with his love of photography to document the lives of those he strived to help. His most notable project was working with Samaritan’s Purse, alongside Franklin Graham and Greta Van Susteren to build the Greta Home for the orphans of Haiti. Along with missionary work, he had a passion for photography and Indian motorcycles. During warmer weather, he was often found cruising the midshore on his 2003 Vintage Chief with his wife by his side on her Indian Spirit. He is survived by his wife Janet, his son Nicholas Deak, two granddaughters, Jasmynn Deak-Drenner, and Jocenya Deak, his sisters, Penny Brink and Patti Blouch, his brothers, Steve Deak (Julie) and Ron Deak (Cheryl), many nieces and nephews, two very special young ladies, Lyndy and Mya, and his dearly beloved German shepherd and bedside companion, Storm. A memorial service will be held on Wednesday, January 24, 2018 at 2:00pm at the Shore Harvest Presbyterian Church in Easton, MD with Pastor Scott Shaw and Pastor Tom Poehlman officiating. Friends may call on family from 1-2pm prior to the start of the service. In lieu of flowers memorial contributions may be made to the Shore Harvest Presbyterian Church, 9560 Black Dog Alley, Easton, MD 21601; Samaritan’s Purse, P.O. Box 3000, Boone, NC 28607; the Peggy Rosato Cancer Fund c/o Memorial Hospital, 100 S. Washington St., Easton, MD 21601; or Compass Regional Hospice, 160 Coursevall Dr., Centreville, MD 21617. Services entrusted to the Framptom Funeral Home, Ostrowski Chapel, St. Michaels, MD. Share memories with the family at www.framptom.com

Frank Robert Deak, of Saint Michaels, MD, passed away on Friday, January 18, 2018. He was 62. He was born in Akron, OH on December 28, 1955, the son of the late Franklin Lengacher and the late Nancy Bailey Deak. He graduated from Northmont... View Obituary & Service Information

The family of Frank Robert Deak created this Life Tributes page to make it easy to share your memories.