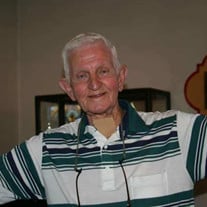 Gary A. “Pert” LeCompte of Hurlock passed away on Sunday, January 6, 2019 at his home in Hurlock. He was 86. He was born on November 16, 1932 in Vienna, Maryland, the son of the late Percy LeCompte, Sr., and Olga Kemp LeCompte. Growing up in Vienna, Pert graduated from Vienna High School with the class of 1951. He later enlisted in the Unites States Navy and served during the Korean War from 1951-1955. He returned home and married Doris Harding on September 5, 1959. He started a life-long career with the former Continental Can which later became Crown Cork and Seal. He was a press operator and later was a lid inspector. He was a lifetime member of Saint Paul’s Episcopal Church in Vienna where he served on the cemetery board and other various committees through the years. He was a lifetime member of the Hurlock American Legion Post #243, and a life member of the Vienna Volunteer Fire Company. Pert was the life of the party. He enjoyed a good time with his family and friends. He enjoyed playing horseshoes and was an avid pool player. He also coached softball for many years leading his team to the championship. He is survived by three children, Gary A. LeCompte, Jr and his wife Mary of Vienna, two daughters, Donna L. LeCompte of Hurlock and Melissa Willoughby and her husband Butch of Hurlock, five grandchildren, Bobbi Dust and her husband Randy, Michael Bell, Jr. and his wife Missy, Brittany Medford and her husband Shawn, Rusty Willoughby and his wife Brittni, and Kelli Helmer and her husband R.J.; seven great-grandchildren; and one sister, Barbara Buckley of Berlin. He was preceded in death by a daughter, Kimberly Faith LeCompte, and four siblings, Percy LeCompte, Jr., Joseph LeCompte, Hannah Adkins and Edward LeCompte. Graveside memorial services will be held on Friday, January 11, 2019 at 2:00 at St. Paul’s Episcopal Cemetery in Vienna with Pastor Dennis Morgan officiating. Expressions of sympathy may be made to Coastal Hospice, P. O. Box 1733, Salisbury, MD 21802. Share memories with the family at www.framptom.com

The family of Gary A. LeCompte created this Life Tributes page to make it easy to share your memories.

Gary A. “Pert” LeCompte of Hurlock passed away on Sunday, January...