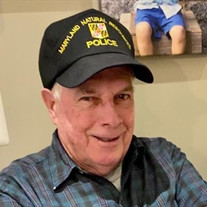 George "Peachie" Nostrand Ball was a caring husband, father, grandfather, brother, and friend. He left this world on April 21, 2022 at age 85, Peachie was born on November 6, 1936 to Tilghman "Teeny" and Dorothy Watts Ball in Neavitt, MD. His brother started calling him "Peachie" when he was born and he has been lovingly known as Peachie since. He graduated from St. Michaels High school in 1954, and he married Virginia Ann Filbird on April 21, 1956. Together, they had 4 children; George Ball, Jr. (Cathy) of Easton, Gary Ball Sr. (Kathy) of Preston, Linda Lyons (Robin) of Easton and Diane Hanson (Brian) of Grand Meadow, MN. In addition to his wife and children, Peachie is survived by his grandchildren; Bille Jo Ball Newman, Robert Ball (Christina), Ashley Newberry (Dan), Melissa Johnson (Brent), Lucas Hanson (Brittany), Jennifer Carrion (Ryan), Gary Ball, Jr. Amber Glaeser (Scott), Jordan Ball, Morgan Kilmon (Josh), and Trevor Hanson (Ashley, and 16 Great-grandchildren. He was preceded in death by his parents, 3 brothers; Richard, Charles, and Joseph Ball, 2 grandsons; Matthew and Michael Lyons. Peachie worked as a truck driver for most of his life, and even after retiring, he loved to drive. Peachie loved spending time in his shop, carving birds and boats, he was "Mr. Fix it" for his entire family. He was a true artist and he could fix anything. Peachie was a family man, and was always willing to offer a helping hand. In his later years, he took great pleasure in caring for his resident raccoons. He adored his grandchildren, and Great-grandchildren, and he took great pleasure in teasing each of them. A graveside service will be held at the White Marsh Cemetery in Trappe on Monday, April 25, 2022 at 2:00PM, with Pastor Bob Davis officiating. In lieu of flowers please make donations to the Easton Volunteer Fire Dep.t 315 Aurora Park Dr, Easton, MD 21601, or to the Talbot County Paramedic Foundation 605 Port St, Easton, MD 21601. Arrangements are entrusted to the Framptom Funeral Home-Ostrowski Chapel of St. Michaels, MD.

George "Peachie" Nostrand Ball was a caring husband, father, grandfather, brother, and friend. He left this world on April 21, 2022 at age 85, Peachie was born on November 6, 1936 to Tilghman "Teeny" and Dorothy Watts Ball in Neavitt, MD. His... View Obituary & Service Information

The family of George N. Ball, Sr. created this Life Tributes page to make it easy to share your memories.