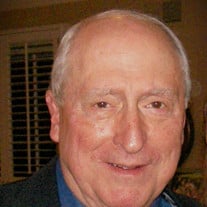 Les Callaway, born June 24, 1935 to Anna and George Leslie Callaway, died April 1, 2022 at Shore Regional Medical Center following a fall. Les grew up in Chevy Chase, Maryland, graduated from Bethesda Chevy Chase High School and attended the University of Maryland, where he made many life-long friends, whom he treasured. Following a ski season working in Vermont and a stint in the U.S. Army Signal Corps, Les worked briefly as a draftsman for Howard P. Foley Company before turning his talents to sales in Washington, D.C. for Smith Corona Marchant, as an independent contractor for Gates Acoustinette (enclosures for early business machines), and later as a Talbot County realtor. In 1960 Les and his parents purchased a St. Michaels property, known as Mildew Manor, later renamed The Getaway. There he and his then wife, Dee Rein, built a home and ran a successful bed and breakfast. The Getaway offered Les' special hospitality to many appreciative St. Michaels visitors. Over the years Les was active with the Exchange Club, St. Michaels Rotary, and the Miles River Yacht Club, where he was once crowned King Poseidon. Sailing the Wild Goose, a 26' Pearson Ariel, fishing from the Boston Whaler and taking guests for touring cruises of the Miles River brought him great joy. With his 40' Vista trawler named Getaway, he took trips down the Inland Waterway culminating his boating dreams. Les loved get-togethers with friends and family, all of whom will miss his humorous stories and hospitality. He is survived by his brother, David Callaway; nephew Todd Callaway (Leslie) and children Lindsay and Jenna; niece Shelly Sharer (David) and children Ryan and Matthew; and niece Susie Burton (Steven) and children, Anna and Carly as well as other relatives and friends too numerous to list, all dear to Les' heart. The family thanks neighbors and friends who supported Les through his final years. An avid reader, Les would have appreciated donations to the Talbot County Free Library Foundation. A Memorial Service will be held on June 3rd, 2022, beginning 11:00 am at Christ Church, St. Michael's Parish, 301 S Talbot Street, St. Michaels, Maryland 21663.

The family of George Leslie Callaway, Jr. created this Life Tributes page to make it easy to share your memories.