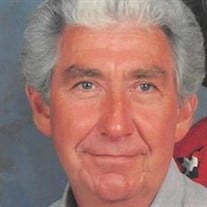 Neavitt - Herman Haddaway of Neavitt went home to be with the Lord on Valentine’s Day, surrounded by his loving family. He was 80 Born on January 7, 1938 in Easton, he was the son of the late James Franklin and Helen Mae Haddaway. Herman was raised in the Bay Hundred area, attending Talbot County Public Schools, graduating from St. Michaels High School. Following his graduation he married the former Barbara Wooters in 1958. He then began a career as a commercial waterman, homebuilder, and finally a Master Commercial Boat Builder. Herman built many Chesapeake Bay boats, a craft he passed on to his son and grandsons whom still operate the family business. He was an avid wood carver, enjoyed hunting and spending time with his children and grandchildren whom he loved dearly. He touched many lives through his positive attitude and service in the community. Mr. Haddaway was a member of the Easton Church of God, where he taught Sunday school and a member of the Bay Hundred Men singing gospel music. He is survived by his beloved wife of almost 60 years Barbara Haddaway of Neavitt, two sons: George Herman Haddaway, Jr. (Denise) and Ronnie Haddaway (Cindy) and one daughter: Jeannie Haddaway-Riccio (Joseph Riccio) . He is also survived by many grandchildren, great, and great-great grandchildren, nieces and nephews including Bud Haddaway (Judy) who was like a brother to him. He was preceded in death by five brothers and two sisters. A viewing will be held at the Framptom Funeral Home Ostrowski Chapel St. Michaels, on Thursday, February 22, 2018 from 6:00 to 8:00PM. Funeral services will be held at the Easton Church of God on Friday, February 23rd at 11:00AM. Burial will be in the Neavitt Cemetery. In Lieu of flowers please make memorial donations to Talbot Hospice Foundation 586 Cynwood Dr. Easton, MD 21601, the Talbot County Watermen’s Association P.O. Box 324 Bozman, MD 21612, or the Bay Hundred Community Volunteers 9243 New Road McDaniel, MD 21647

Neavitt - Herman Haddaway of Neavitt went home to be with the Lord on Valentine&#8217;s Day, surrounded by his loving family. He was 80 Born on January 7, 1938 in Easton, he was the son of the late James Franklin and Helen Mae Haddaway. Herman... View Obituary & Service Information

The family of George Herman Haddaway Sr created this Life Tributes page to make it easy to share your memories.

Neavitt - Herman Haddaway of Neavitt went home to be with the...