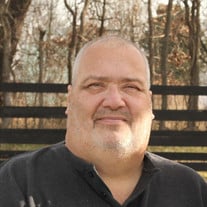 Gerald Pruitt Taylor, Jr., “G.P.” passed away on Saturday, May 9, 2020, at his home in Preston, Maryland. He was 55 years old. He was born on July 28,1964, in Cambridge, Maryland, the son of Gerald (Jerry) P. Taylor, Sr. and Sharon Johnson Taylor of Cambridge. He graduated from Cambridge South Dorchester High School with the class of 1982. During high school, he worked at the Daily Banner and Cambridge Wire Cloth. He married Teresa “Teri” Prettyman Taylor on November 21, 1992, and they made their home in Preston. He was a member of the Cambridge Volunteer Fire Department and served as Smokey the Bear in many Christmas parades. He later worked for Prettyman Manor. He also owned and operated Taylor Appliance Movers working with local appliance stores delivering appliances to their customers. He enjoyed meeting his customers and always shared stories about those he met. Later he worked for the Framptom Funeral Home and then Shore Regional Medical Center at Cambridge and Easton as a security guard. G.P. developed a love for karate in the ninth grade that would span his lifetime. Over the years, under the tutelage of his life-long friend, Duane Dieter, G.P. taught karate to many young men and women. G.P had earned a third degree black belt that he was very proud of. He was a member of Bethlehem Wesleyan Church for many years. He loved the Lord with all his heart and developed a deep relationship with Christ Jesus. A cup of coffee with friends and helping people were things he enjoyed greatly.. In addition to his wife,Teri, he is survived by his parents, Jerry and Sharon Taylor of Cambridge, a brother, Robin Taylor and his wife Sharon of Cambridge, father and mother in-law, Frank and Brenda Prettyman of Preston, sister in-law, Lara Bounds and her husband John of Preston, brother in-law Frankie Prettyman and his wife Melissa of Preston, nephews and nieces: Caleb Prettyman, Hannah Dale Taylor, Gabe Prettyman, Carson Mills Taylor, Preston Bounds, and Sadie Prettyman, and many aunts, uncles, cousins and friends. He was preceded in death by his paternal grandparents, Medford and Lena Taylor, maternal grandparents, McCullough and Myrene Johnson, and had developed a deep friendship with his grandfather-in-law, Orenzo R. Adams (Shorty). He loved his fur-babies: Beauty, Tom, Snickers, Snowball, Jer-Bear, Smokey, Mocha, and Roscoe, who will miss him greatly. Due to restrictions of COVID19, there will be a walk-through visitation without seating on Thursday, May 14, 2020, from 3:00 to 6:00 at the Framptom Funeral Home in Federalsburg. Graveside services will be private. Expressions of sympathy may be made to the Bethlehem Wesleyan Church, 5330 Bethlehem Road, Preston, MD 21655.

The family of Gerald Pruitt Taylor, Jr. created this Life Tributes page to make it easy to share your memories.