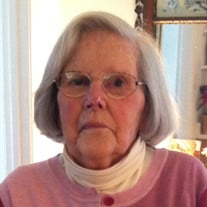 Gertrude Garman Lang, “Trudy,” of Easton, MD passed away on June 17, 2019. Trudy was born in Baltimore, MD on July 25, 1920. Trudy graduated from Hood College in Maryland, where she received her Bachelors of Education. Trudy was married to Charles Edwin Lang, “Bud,” on August 29, 1942. Their marriage was a testimony of devoted love to each other and to their faith. They were married 69 years. Trudy was a dedicated wife and mother. She raised her four children in Baltimore County. She taught first grade at Gilman School in Baltimore for many years. Trudy and Bud moved to the Eastern Shore of Maryland, where she and a friend, Charlotte Todd, started a decorative pillow business called Todd Creations. Trudy’s sincerity and kindness were admired by all who knew her. Trudy is survived by four children, Jane Fincher of Miami, Charlie Lang of Miami, Mary Logan of Chestertown and Peter Lang of Trappe, MD. Trudy had four grandchildren and eight great-grandchildren. She loved them all dearly and they loved her. Trudy is preceded in death by her parents Guy and Emily Garman, her brother Frederick, her husband Bud and her son Richard. A Memorial Service will be held at Immanuel Lutheran Church, 7215 Ocean Gateway (Route 50) at 10 am on Tuesday, June 25. After the service her immediate family will attend her burial at Loudon Park Cemetery in Baltimore, Maryland. In lieu of flowers, contributions may be made to Talbot Hospice, 586 Cynwood Drive, Easton, MD 21601. The family wishes to thank the staff at Heartfields Assisted Living in Easton where Trudy has lived for the past eight years and has received the most attentive, loving care you could ever want for your loved one. The family would also like to thank Hospice for their loving and dedicated care for Trudy.

Gertrude Garman Lang, &#8220;Trudy,&#8221; of Easton, MD passed away on June 17, 2019. Trudy was born in Baltimore, MD on July 25, 1920. Trudy graduated from Hood College in Maryland, where she received her Bachelors of Education. Trudy... View Obituary & Service Information

The family of Gertrude Garman Lang created this Life Tributes page to make it easy to share your memories.