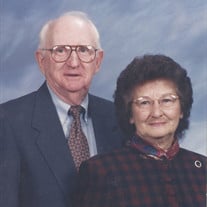 Gladys M. Collins of Federalsburg passed away on Sunday, February 23, 2020 at her home surrounded by her family. She was 94. She was born on July 7, 1925 in Federalsburg, Maryland the daughter of the late O.J. Morgan and Elsie Baily Morgan. She married the love of her life, Calvin “Bill” Collins and they made their home in Federalsburg. They had celebrated 68 years before he preceded her in death on August 15, 2014. She was very active over the years in her community. She was a past member of Christ United Methodist Church, and later attended New Liberty Church. She also served in the Federalsburg Vol. Fire Company Ladies Auxiliary for many years. Gladys and Bill would travel every February to Florida to visit the annual Navy reunions, and also loved meeting the Arby’s breakfast Club in Seaford. Above all, she loved spending time with her family and grandchildren. She is survived by a daughter, Sharon Lord of Federalsburg, two grandsons, Wayne “Butch” Lord and his wife Dawn of Bridgeville and Barry Lord and his wife Brenda of Federalsburg; four great-grandsons, Bradley Lord and his wife Rachel of Delmar, DE, Taylor Lord and his wife Ashlee, of Federalsburg, Mitchell Lord of Lexington Park, MD and Steven Lord of Bridgeville; great-great-grandchildren children: Trevor Lord, Bennett Grant, and Blayke Lord all of Federalsburg; Hallie Lord of Delmar, DE; a sister Marie Elliott of Atlanta, GA, and several nieces and nephews. In addition to her husband and parents, she was preceded in death by three sisters, Irene Fisher, Norma Lee Towers and Shirley Tedley and her beloved cat, Papoose. A funeral will be held on Sunday, March 1, 2020 at 2:00 at the Framptom Funeral Home in Federalsburg. Burial will follow at Hill Crest Cemetery in Federalsburg. The family will receive friends from 1:00 to 2:00. Expressions of sympathy may be made to the Federalsburg Vol. Fire Company, Post Office Box 99, Federalsburg, MD 21632 or to Compass Regional Hospice, 160 Coursevall Drive, Centreville, MD 21617.

Gladys M. Collins of Federalsburg passed away on Sunday, February 23, 2020 at her home surrounded by her family. She was 94. She was born on July 7, 1925 in Federalsburg, Maryland the daughter of the late O.J. Morgan and Elsie Baily Morgan. She... View Obituary & Service Information

The family of Gladys M Collins created this Life Tributes page to make it easy to share your memories.

Gladys M. Collins of Federalsburg passed away on Sunday, February...