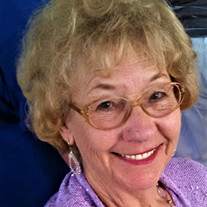 Glenna Lucille (Jackson) Richardson, age 91, passed away peacefully at the Easton Memorial Hospital on May 1, surrounded by loved ones. She was born on April 21, 1930, the daughter of the late Thomas Nickell Jackson and Minnie Mae Ritenour Jackson in Frederick County, Winchester, West Virginia and moved with her family to Federalsburg, MD when she was 2 years old. During her childhood her father was a mechanic in canning factories. He built their own travel trailer and the family traveled and lived in Mississippi, Louisiana, and Florida. When she was 12 years old, she worked in the local canning factory for two summers. Later she worked in the downtown ice cream store and the Federalsburg movie theater. She graduated from Federalsburg High School in 1948 and worked at E.I. DuPont in Seaford, DE in the chemical lab for 27 years before retiring on April 1, 1984. After retirement she volunteered at church and the VFW where she was a lifetime member of the auxilliary. At 74 she joined the Caroline County AARP and organized and led bus trips throughout the U.S. and Canada. The last bus trip she conducted was when she was 80 years old, but she still was talking about organizing another trip to Myrtle Beach. She was also a member of the Caroline County Garden Club, the Caroline County Antique Club, and the Widows and Women of the Moose. Lucille was a member of Union United Methodist Church for 70 years; she was president of the U.M. Women for two years, a Circle member, and also a Sunday School Teacher. In recent years she also attended Christ United Methodist Church, also in Federalsburg. Lucille loved family, going to Ocean City, playing cards with the girls, dancing, travelling, gardening, going to karaoke on Friday nights, reading, and the United States of America. She loved people and especially her wonderful friends. She is survived by her children, Gloria R. Brake (Hamilton) of Cambridge, MD and Marsha R. Kenton (Dale) of Preston, MD, grandchildren, Sarah L. Wheatley (Steve) of Crofton, MD, Maureen K. Garcia (Phillip) of Cibolo, TX and Ryan D. Kenton of Preston, MD, great-grandchildren, Landon and Julianna Garcia of Cibolo and Ava E. Kenton of Preston, her siblings, June Elzey and Betty Parks (Cecil), and a brother-in-law William Richardson. She was preceded in death by her parents, her husband, Robert Marshall Richardson, her brothers Frank, Tom, and Marshall Jackson, and her sister, Nettie Windsor. A memorial service will be held on July 24, 2021 at 12pm at Framptom Funeral Home in Federalsburg, MD. with a visitation preceding at 11:00. Inurnment will be private. In lieu of flowers memorial donations may be made to Union United Methodist Church, 301 N. Main Street, Federalsburg, MD 21632, Christ United Methodist Church, 201 S. Main Street, Federalsburg, MD 21632, or to Federalsburg Volunteer Fire Department, 208 University Ave., Federalsburg, MD 21632.

Glenna Lucille (Jackson) Richardson, age 91, passed away peacefully at the Easton Memorial Hospital on May 1, surrounded by loved ones. She was born on April 21, 1930, the daughter of the late Thomas Nickell Jackson and Minnie Mae Ritenour... View Obituary & Service Information

The family of Glenna Lucille Richardson created this Life Tributes page to make it easy to share your memories.