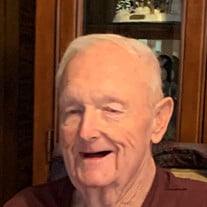 *****SERVICE TIMES HAVE BEEN CHANGED DUE TO PENDING WEATHER***** Guy Maguire “Buddy” Harding, Jr. passed away on Wednesday, January 27, 2021 at Tidal Health Peninsula Regional Medical Center in Salisbury, Maryland. He was 78. He was born on November 18, 1942 in Reid’s Grove, Dorchester County, Maryland the son of the late Guy M. Harding, Sr., and Helen Hollerman Harding. On August 3, 1968 he married Sharon Whitby Harding and they made their home in Hurlock. Over the years, Guy worked for Sunshine Laundry and later Phillips Cleaners as a maintenance mechanic. In his younger days, Guy was an avid soft ball player. He played with his friends on the Vienna Team for many years. He also enjoyed fishing and hunting. Later he could be found tinkering around his shop, working on this and that. He also loved to ride the roads in his white Dodge pickup truck and go out to Eat with his friends Ellsworth and McKinley. He is survived by his wife of 52 years, Sharon Harding of Hurlock, five children: Sherry Jones and her Fiancée Michael Lankford of Reliance, Guy “Sonny” Harding, III and his fiancée Heather Patchett, Amy Harding all of Federalsburg, Ronald Harding of Linkwood and Karen Harding of Cambridge; seven grand- children: Dylan Jones and his wife Ashley, Guy Harding, IV, Tamia Goslee, Leon Spry, Jr., Ronald Harding, Jr. and his wife Tabitha, William “Billy” Harding and his wife Amber, Ricky Cannon and Karey Cannon; a host of great-grandchildren; two sisters: Betty Lowe of Cambridge, and Sharon Hurley and her husband Earl of Reid’s Grove. In addition to his parents, he was preceded in death by three sisters: Doris Harding, Linda Mae Condon and Helen Taylor. Funeral services will be held on Thursday, February 4, 2021 at 1:00 at the Framptom Funeral Home in Federalsburg. Burial will follow at East New Market Cemetery. The family will receive friends from 11:00 to 1:00 for a walk through visitation. Face coverings and social distancing will be in practice and seating will be limited. In lieu of flowers, expressions of sympathy may be made to the Framptom Funeral Home, 216 North Main Street, Federalsburg, MD 21632 to help defray funeral costs. Share memories with the family at www.framptom.com

*****SERVICE TIMES HAVE BEEN CHANGED DUE TO PENDING WEATHER***** Guy Maguire &#8220;Buddy&#8221; Harding, Jr. passed away on Wednesday, January 27, 2021 at Tidal Health Peninsula Regional Medical Center in Salisbury, Maryland. He was 78. He... View Obituary & Service Information

The family of Guy Maguire Harding, Jr. created this Life Tributes page to make it easy to share your memories.

*****SERVICE TIMES HAVE BEEN CHANGED DUE TO PENDING WEATHER*****