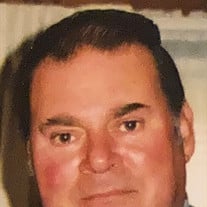 Harold "Sonny" Randolph Collins of Preston, Maryland passed away on Wednesday, February 23, 2022 at the University of Maryland Medical System at Easton. He was 75. He was born on February 1, 1947 in Denton, Maryland, the son of the late Harold E. Collins and Mary Griffith Collins. He attended Caroline County Public Schools. He later married Alice A. Coppage Collins. She preceded him in death on June 3, 2019. He was a mechanic most all of his life. He worked for M.L. Trucking, Preston Trucking, and later Duvall Brothers until his retirement. In his free time, Sonny enjoyed camping, hunting, fishing, and riding his motorcycle. He also loved to spend time with his family and grandchildren. He was a lover of all animals. Anyone that walked through his doors was treated like family by him, he touched many lives. He is survived by two daughters: Donna Burrows and her husband Mark of Preston and Shelly Collins of Easton; six grandchildren: Jay Burrows, Jessica Young, Ashley Burrows, Emily Spalding(Jason), April Harrison and Brennen Burrows and eight great grandchildren; five sisters: JoAnn Glanden of Denton, Betty Bennett (Ricky) of Hurlock, Bonnie Sinclair(Louis) of Denton, Yvonne Nagel(Henry) of Federalsburg and Debbie Wright(Bob) of Cambridge; many nieces and nephews and a special friend who was like a daughter Debbie Sinkule, her children and grandchildren. He will be dearly missed by his dogs Daisy and Shaggy. In addition to his wife and parents, he was preceded in death by a sister Maryll Nagell; brother in law Lee Glanden and nephew Eric Glanden. Funeral services will be held on Friday, March 4, 2022 at 1:00 at the Framptom Funeral Home in Federalsburg. Burial will follow at Junior Order Cemetery in Preston. The family will receive friends from 11:00 to 1:00. Expressions of sympathy may be made in his memory to the Preston Vol. Fire Company, Post Office Box 44, Preston, MD 21655.

Harold "Sonny" Randolph Collins of Preston, Maryland passed away on Wednesday, February 23, 2022 at the University of Maryland Medical System at Easton. He was 75. He was born on February 1, 1947 in Denton, Maryland, the son of the late... View Obituary & Service Information

The family of Harold Randolph Collins created this Life Tributes page to make it easy to share your memories.