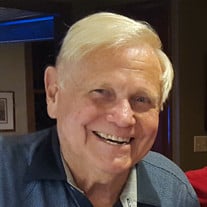 On Saturday, September 25, 2021, Harvey H. Stewart Jr., loving husband and father of 3, passed away peacefully at the age of 92 in Easton, Maryland. Harvey was born in Charlotte, N.C. on December 4, 1928 to Mae and Harvey Stewart Sr. After graduating from Woodberry Forest School in Virginia, he went on to Duke University, graduating with an Engineering degree. It was there he met Carol Cleaveland. They were married in June of 1951 and celebrated their 69th wedding anniversary in 2020. Joining the U.S. Army after Duke, Harvey was stationed in Austria, where Carol joined him, and where they enjoyed traveling whenever time allowed. They raised 3 children, one daughter, Shery, and two sons, Chris and Mark. Harvey had a talent for repairing and improving anything. Many a weekend he could be seen working on numerous projects or on his "fleet", with his sons in the garage or driveway of his beloved Mulberry Point. He only purchased one new car in his life, preferring those that had "proven themselves" by impressive mileage! Being a serious ocean lover, Harvey and Carol turned their mutual enjoyment into a successful business on the Jersey Shore in Stone Harbor. They spent many years purchasing, managing and maintaining lovely rental properties for summer shore visitors. For rest and relaxation, Harvey and Carol traveled to Mexico every year to embrace that seaside area for several weeks, enjoying the culture, befriending the locals, and learning to speak Spanish. They generously encouraged family to come visit and we often did. Being a pilot was Harvey's great passion. He and Carol both got their licenses in their 50's, owned several planes and enjoyed flying together for 20+ years. He served on the Talbot County Airport Board from 1998 to 2018. In recognition for his 20 years of service to them, he was subsequently appointed as an Emeritus Member of the Board. Harvey was preceded in death by Carol in July of 2020 and is survived by his 3 children and spouses and four grandchildren. His sense of humor, joking manner, and great love of family will be missed by us all. He and Carol were able to live out their lives at their beloved home on Mulberry Point, gazing out onto Broad Creek from the kitchen window of their waterfront property as they had always hoped they would do. A Celebration of Life will be held at a later date. Donations in Harvey's memory would be welcomed by the following organizations: • Chesapeake Bay Maritime Museum - cbmm.org • Chesapeake Multicultural Resource Center - chesmrc.org • HNC Living Foundation - hncliving.org To share memories with the family, please visit www.framptom.com

On Saturday, September 25, 2021, Harvey H. Stewart Jr., loving husband and father of 3, passed away peacefully at the age of 92 in Easton, Maryland. Harvey was born in Charlotte, N.C. on December 4, 1928 to Mae and Harvey Stewart Sr. After... View Obituary & Service Information

The family of Harvey H. Stewart, Jr. created this Life Tributes page to make it easy to share your memories.