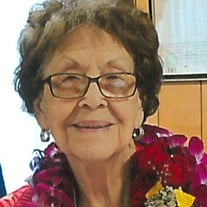 Helen Duke Wilson was ushered home to Heaven on July 7, 2021. She passed peacefully in her home under the watchful care of her family and Vitas Hospice. Helen was born August 12, 1917 to the late Captain Charles R. Duke and the late Juliet W. Duke, the fourth of six children. She was married to the late Lawrence H. Wilson, for 33 years and parented two children: Donna Kay Wilson Davis and Linda Ann Wilson Wright-Campbell. She is preceded in death by her five siblings, Gladys "Chiquita" Duke Meyers, Inez Duke, Myrtle Duke Bethune, Thelma Duke Tyrell and Walter Duke; her daughter Donna Kay and son-in-law Larry Davis; sons-in-law Marvin Wright, and JR Campbell. She is survived by her daughter, Linda Wright-Campbell, and her grandchildren, Shelly Wright Yaeger (and husband Matthew and son Camden) of Fort Mill, SC, and Jeff Wright of Greenwood, DE, who assisted diligently with her care until the end of her life. Helen and her family moved to Delaware when she was 4 years old; she attended Fisher's School and graduated in 1935 from Greenwood High School. She continued her education at Wilmington General Hospital Nurse's Training, until she was married. Finally, at the age of 60, she graduated from Delaware Technical and Community College with an Applied Science Degree in Dietetics. Helen held various jobs during her life: she picked strawberries for a cent and a half per quart, sorted and graded pearl buttons, seamed nylons at a hosiery mill, and was a veteran of the Greenwood School system, in Food Service, retiring after 29 years of service, her final role was that of Cafeteria Manager. She was well known for her sewing; she made majorette and cheerleader uniforms, aprons for Alumni Banquets, and clothes for family and friends. She knitted, crocheted, and made afghans. She was also famous for her cooking, preparing many pots of soup, cakes, and meals for the sick or bereaved, or for friends' birthdays. Nearly annually she would enter her sewing and culinary creations in the Delaware State Fair and was often awarded for her efforts. When she wasn't cooking or sewing, Helen loved to bowl, and participated in a bowling league well into her 70's. She loved music and dancing, sang in the church choir, taught Sunday School, and was an active member of Grace United Methodist Church and St Johnstown United Methodist Church, reading her Bible daily, until her eyesight declined. Helen loved poetry and quips, which she included in birthday, anniversary, get well, or simply just "thinking of you" cards. She loved talking on the phone, and socializing with the "Third Thursday Lunch Bunch", a retirees group from Greenwood School. Helen also liked to draw, work with flowers in her yard and make bouquets for church and for friends. She was an enthusiastic sports fan, rooting for both her daughters when they played in school sports, but her greatest sports passion was baseball. She was the ultimate Orioles fan, watching, then listening to the games once her eyes failed her, hollering creatively, or applauding depending on the situation. Her #1 main man was Cal Ripken. Helen was an accomplished caregiver - her wards have included sick children, a husband with cancer, her mother, her sisters Chiq and Myrtle until their passing, and also saw her daughter through the loss of two husbands. Helen was a devoted patriot - she loved America, voted in all elections, and watched Fox News for hours to stay up to date on politics. She enjoyed lively discussions on what was happening in the world. Helen was happiest when she was with family, especially during the summers spent with her two grandchildren, Shelly and Jeff; they went out to eat, had picnics, went bowling, and just enjoyed the time together! What Helen was likely most known for, besides her delicious cooking, was her sense of humor, wit, ability to have fun, and make people laugh. Her stories, whether embellished or true, were legendary and will be remembered and cherished always. Special thanks to VITAS Hospice and caregivers: Cyndi, Dr. Wolfgang, Jess, Mimi, Fran, Kim, Polly, Christina, Bill and everyone who supported mom during this time. Funeral services will be held on Saturday, July 10, 2021 at 1:00 at the Framptom Funeral Home - Fleischauer Chapel in Greenwood. Interment will follow at St. Johnstown Cemetery. The family will receive friends from 11:00 to 1:00. Expressions of sympathy may be made to the St. Johnstown United Methodist Church, Post Office Box 124, Greenwood, DE 19950.

Helen Duke Wilson was ushered home to Heaven on July 7, 2021. She passed peacefully in her home under the watchful care of her family and Vitas Hospice. Helen was born August 12, 1917 to the late Captain Charles R. Duke and the late Juliet... View Obituary & Service Information

The family of Helen Duke Wilson created this Life Tributes page to make it easy to share your memories.