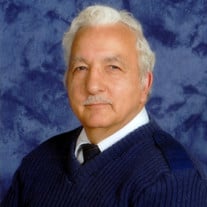 Henry Micheliche, Sr. Lt. Col. U.S.A.F. Ret. Beloved Husband, Father, Grandfather, Great Grandfather and friend, Lt. Col. Henry Micheliche Sr. of Hurlock, Maryland passed away quietly at his home, surrounded by family on Sunday, August 8, 2021 at the age of 88. He was born on May 4, 1933 in Brooklyn, New York, the son of the late Felix Micheliche and Theresa Torres Gonzales. Henry was married to the late Norma A Pimentel on October 28, 1955. He was a man of many talents and accomplishments. He was extremely gifted in Art and was chosen and attended the High School of Performing Arts (now known as Fiorello H. LaGuardia High School). After High School, a friend got him into boxing, where he worked his way into the Golden Gloves and knocking out an opponent in 10 seconds won him the title of Feather Weight Champ, he was approached by a trainer that wanted to train him in a career of boxing, but his love for his country pulled him in another direction and he enlisted in the United States Air Force. After several years of enlistment, he decided that he wanted to become an officer and went to officer training school. During his training, volunteers were asked for and unknowing what he was volunteering for, he volunteered. What they were looking for, was pilot trainees. This led him to lifelong career as a pilot. He served in the Korean War and the Vietnam War as a reconnaissance pilot where he flew many missions into dangerous territories. He traveled to many places around the world, lived in many states and countries and saw many things. His love for flying spanned over a half a century, he was a decorated war vet receiving many honors including the Distinguished Flying Cross, he served in the National Guard, the Civil Air Patrol and was a Pilot for United Air Lines for 30 years. By the time of his retirement, he was a Captain for United Air Lines and a Lt. Col. In the United States Air Force. He is survived by his four children; Henry Micheliche Jr. and his fiancée, Susan Stull of Federalsburg, Robert Micheliche and his wife Antoinette Lucas of Federalsburg, Diana Micheliche Tolson and her husband Paul Tolson of Astor, Florida, and Brian Micheliche and his wife, Judy Blockston of Federalsburg. He has 18 grandchildren and many great grandchildren In addition to his wife and parents he is preceded in death by his siblings, Elisa Ferrer Ramirez, Simon Ferrer, Tony Ferrer Joseph Ferrer, Angelo Ferrer, Raul Micheliche, Emil Micheliche Funeral Services will be held at 1:00PM on Tuesday, August 17th at the Framptom Funeral Home 216 N. Main Street, Federalsburg, MD. A viewing will be held from 12:00pm until 1:00PM. Burial will be in the Maryland Veterans Cemetery, Hurlock

The family of Henry Micheliche, Sr. created this Life Tributes page to make it easy to share your memories.