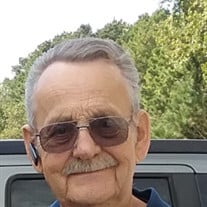 Howard Raymond Dubiel of Federalsburg, Maryland passed away on Wednesday, September 30th, 2020 at his home surrounded by his loving family. He was 74 years old. He and was born in Brooklyn, Maryland on March 20th 1946. Howard was the son of the late Joseph James Dubiel, Sr. and Claire Elaine (Warmuth) Dubiel. Howard was a Vietnam veteran who served over 23 years as a Jet Engine Mechanic and Recruiter in the United States Air Force. He retired from the Air Force as a Senior Master Sergeant in 1986. In his spare time, Howard enjoyed anything outdoors especially his bunny rabbits and squirrels. He also enjoyed hunting, fishing, camping, playing cards, going to the casino and woodwork out in the shop. His greatest joy in life was his family and grandchildren. Howard was a lifetime member and past commander of VFW #5246 out of Federalsburg, Maryland and also a member of American Legion #29 out of Denton, Maryland. Howard is survived by his daughter, Rebecca Stowers and her husband Gene, five grandchildren, Ricky Rodgers (Karen) of Ridgely, Crystal Rodgers (Brad) of Trappe, Lindsey Rodgers of Greensboro, Kelsea Dodd (Ryan) of Denton and Shelby Dodd (Michael) of Greensboro, three great-grandchildren, Brantley Nichols, Aubree Allen, and Kaleb Backer, three sisters, Enid Yamasaki of Severn, Teresa Steger (David) of Pasadena, Rosalie Miller (Terry) of Rileyville, Virginia and his brother Anthony Dubiel (Shelia) of Goldsboro. He was preceded in death by his parents, his wife of 52 years, Dorothy Mae Dubiel and his oldest brother Joseph Dubiel, Jr. (Ginger). The family will hold a memorial service on Saturday, October 24th, 2020 at American Legion #29 in Denton, Maryland from 1 p.m. to 4 p.m. Services entrusted to the Framptom Funeral Home. Please direct flowers to his daughter, Becky Stowers located at 6523 Bailey Store Road Federalsburg, Maryland 21632. Share memories with the family at www.framptom.com.

Howard Raymond Dubiel of Federalsburg, Maryland passed away on Wednesday, September 30th, 2020 at his home surrounded by his loving family. He was 74 years old. He and was born in Brooklyn, Maryland on March 20th 1946. Howard was the son... View Obituary & Service Information

The family of Howard Raymond Dubiel created this Life Tributes page to make it easy to share your memories.

Howard Raymond Dubiel of Federalsburg, Maryland passed away on...