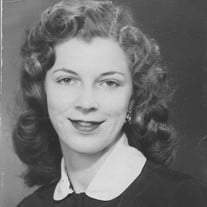 Irene Joslyn (nee Kelly) Upham passed peacefully on February 6, 2020, at Coastal Hospice at The Lake in Salisbury, MD after a lengthy and valiant fight with illness at the age of 84. Irene is survived by her daughter Charlene Upham and son in law Steve Blumenauer of Mardela Springs, MD. She is preceded in death by her husband of 63 years, Charles Robert Upham on July 18, 2019; her parents Orem and Winnie Kelly of Galestown, MD; and her siblings Betty (Kelly) Richardson, Hilda (Kelly) Lassiter, Edwin Kelly and Brince Kelly. She was born on April 5, 1935 in Cambridge, MD to Orem Kelly and Winifred Brinsfield Kelly. She was raised on the family farm in Galestown, MD, attended the one room schoolhouse located there - from which she recollected many fond memories – and went on to attend high school in Hurlock, MD. Irene married Charles Robert Upham in 1957, they purchased a home in Galestown and welcomed their only child Charlene in 1958. She is remembered as loving, dedicated mother who instilled high moral values, self-discipline along with a strong work ethic. They were members of Galestown Methodist Church. Irene operated an antiques shop and mail order business from their home in 1964 and Charles changed careers to join her when Chris Craft left Salisbury where he was employed. They formed C.U. Antiques and built a shop and home on the newly created Dual US Rt 50 near Mardela Springs until 2018, ceasing operation due to health-related issues. They enjoyed a remarkable and successful career and were well known on the Eastern Shore and along the East Coast and Mid-West where they participated in shows from New York to Miami, Indianapolis, Nashville & Atlantic City. A funeral service will be held on Thursday, February 13, 2020, at Framptom Funeral Home in Federalsburg, MD, at 1pm with Pastor Marie Coulbourne officiating. A visitation will be held from 12-1pm prior to the start of the service. Interment will be held at Galestown Cemetery immediately following the service. A special thanks to Shawn Barnes and her home health aides at Helping Hands Eldercare; the past & present administration and staff of Sterling Care at Harbor Pointe where Irene received exceptional care during her residence there; Dr. Ronald Passeri & staff at Peninsula Internal Medicine; PRMC; and finally Coastal Hospice at The Lake for compassionate care given to her in her final days. Services entrusted to the Framptom Funeral Home. Share memories with the family at www.framptom.com.

Irene Joslyn (nee Kelly) Upham passed peacefully on February 6, 2020, at Coastal Hospice at The Lake in Salisbury, MD after a lengthy and valiant fight with illness at the age of 84. Irene is survived by her daughter Charlene Upham and son... View Obituary & Service Information

The family of Irene Kelly Upham created this Life Tributes page to make it easy to share your memories.