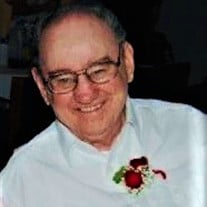 Jackie “Jack” Fisher passed away on Thursday December 3, 2020 at the Talbot Hospice House in Easton Maryland. He was 85. He was born on July 22, 1935, the son of the late John Henry Fisher and Anna Marie (Wothers) Fisher. He Graduated from Federalsburg High School where he was involved in gymnastics. He also loved spending time swimming and fishing with friends at Chambers lake which was near his home. He went on to meet and marry the love of his life Carlis Virginia Baynard on January 22, 1955. He started working as a teenager at Caroline Poultry in Federalsburg and worked his way up to Supervisor. This is a position he excelled in and continued in that role when he went to Bayshore Foods which became Con Agra in Hurlock. His knowledge of Shipping Department operations was really put to use when on many occasions he was sent to other plants, sometimes in other states to help get their Shipping Departments running efficiently. In his time outside of work he enjoyed fishing and crabbing with his friends, watching sports, listening to country music and spending time with friends and family. In later years he started sharing his love for music as he would give tapes and CDs of his favorite music to those closest to him. He is survived by his wife Carlis Virginia Fisher, children Teresa Ann Murphy, Peggy Anne Roberts, Jack Fisher Jr., Lisa Jean Brinsfield, and Carlton Austin Fisher. Grandchildren are Amy J. Carpenter, Jennifer A. Murphy, Kimberly D. Davis, Derek Brinsfield, Scott C. Fisher, Jeremy R. Fisher, Kevin A. Fisher and Amanda N. Fisher, numerous great grandchildren and nieces and nephews. He is also survived by his younger sister Faye Bowdle and brother-in-law Charles Griffith. He was preceded in death by his parents and his siblings Peggy Fisher, Edgar Howard and Ralph “Jim” Howard and Patricia Griffith. Services will be private. A Celebration of Life will be planned at a later date. In Lieu of flowers, the family suggest a donation to The Federalsburg Lions Club, PO Box 403, Federalsburg, Maryland 21632. Please write Chambers Park Project in the memo section. Share Memories with Family and Friends at www.frampton.com.

The family of Jackie Fisher created this Life Tributes page to make it easy to share your memories.