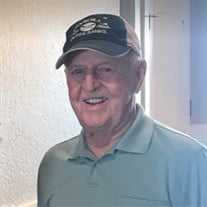 James Edward Banning, formerly of Federalsburg, passed away on October 9, 2019 at Milford Hospice. He was 81. Mr. Banning was born on Sept. 7, 1938 in Easton, MD, the son of the late Gilbert Alton Banning and Nora Mae Hastings Banning. He was a graduate of Federalsburg High School Class of 1956, and earned a business degree at Wesley College. He served in the Coast Guard and was an entrepreneur as he created many businesses, including Trinity Transport. He was known for his love of Clydesdale horses which he shared with residents and staff at nursing homes. He was a member of Crossroads Community Church, active in Teen Challenge and other faith based organizations. He is survived by his wife of 53 years, Deana Cox Banning, whom he married on Sept. 3, 1966, 3 sons, Jeff Banning (Ronda) of Laurel, DE, Darrel Banning (Gina) of Seaford, Billy Banning (Erin) of Ocean City, MD, a daughter Christy M. Gorski (Bobby) of Seaford, DE; 10 grandchildren, Jessica Davidson (Nick), Dylan, Tyler, Trey, Lindsey, Kaylee, Regan, and Gracen Banning, Hanna and Ross Gorski; brother Gerald Banning (Sue) of Federalsburg, 2 sisters Barbara Marine of Greenwood, DE and Janet Brown of Seaford and several nieces and nephews. In addition to his parents he was preceded in death by 2 sisters, Shirley Ruark, and Carole Banning, and an infant brother, William Banning. Funeral services will be held on Monday, Oct. 14 at 10:00 am at Crossroads Community Church in Georgetown, DE. A private interment will be held at Hill Crest Cemetery in Federalsburg, MD. Viewing will be held at the church on Sunday from 6-9 pm. Memorial contributions may be made in his memory to Teen Challenge, PO Box 1271, Seaford, DE 19977, or to Crossroads Community Church, 20684 State Forest Rd., Georgetown, DE 19947. Arrangements entrusted to the Framptom Funeral Home.

James Edward Banning, formerly of Federalsburg, passed away on October 9, 2019 at Milford Hospice. He was 81. Mr. Banning was born on Sept. 7, 1938 in Easton, MD, the son of the late Gilbert Alton Banning and Nora Mae Hastings Banning. He... View Obituary & Service Information

The family of James Edward Banning created this Life Tributes page to make it easy to share your memories.

James Edward Banning, formerly of Federalsburg, passed away on...