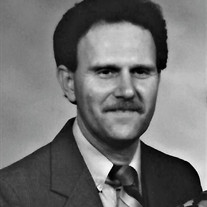 James F. Hubbert, Sr. passed away on Wednesday, September 16, 2020 at Caroline Nursing and Rehabilitation Center in Denton, MD. He was 75. He was born on September 18, 1944, the son of the Everett M. Hubbert and Alice K. (Hastings) Hubbert. He graduated from North Dorchester High School in 1962 and he married the love of his life, Nancy Smith on February 24, 1965. Shortly after high school, James started his own refurnishing and furniture upholstery business, as it was something he loved to do. In the years to follow, he worked for many furniture stores and Peebles. He last worked at Bay Star in Easton, but had to retire due to declining health. In his time outside of work, James loved meeting and talking to people, going antiquing, going for rides, and attending any functions that his beloved granddaughter Jocelynn was involved in. James was a long time member of Christ United Methodist Church in Federalsburg, MD. Over the years he was a member of the Methodist Men, as well as singing in the Senior Choir. He was also a member of the gospel music group, The Christian Troopers and enjoyed the many places they went to sing. He is survived by his son, James F. Hubbert, Jr. (Jennifer) of Federalsburg, MD, a granddaughter, Jocelynn Rose Hubbert of Federalsburg, MD, sister-in-law, Patricia Gauen (Richard) of East New Market, MD, cousins, Rosalie Mitchell, JoAnn Lord, Rosalie Hastings, and Ed Schiff, nieces and nephews, Debbie and Steve Beers, Kenny and Dara Gauen, Bonnie and Kenny Powell, Tammy and Mike Shufelt, and his church family. He was preceded in death by his parents, his brother Wayne Hubbert and his wife, Nancy Hubbert. A funeral service will be held on Sunday, September 20, 2020 at 2pm at Framptom Funeral Home in Federalsburg, MD with Pastor Pam Bockhart officiating. Friends may call on the family from 12-2pm prior to the start of the service. Interment will be private. In lieu of flowers, memorial contributions may be made to Christ United Methodist Church, 201 S. Main Street, Federalsburg, MD 21632. Services entrusted to the Framptom Funeral Home. Share memories with the family at www.framptom.com.

James F. Hubbert, Sr. passed away on Wednesday, September 16, 2020 at Caroline Nursing and Rehabilitation Center in Denton, MD. He was 75. He was born on September 18, 1944, the son of the Everett M. Hubbert and Alice K. (Hastings) Hubbert. He... View Obituary & Service Information

The family of James Francis Hubbert created this Life Tributes page to make it easy to share your memories.