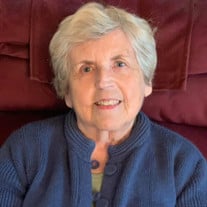 Janet Brown Hammed passed away peacefully at her home in Bozman, Maryland on Saturday, March 19, 2022. She was 77 years old. Born August 8, 1944 at Memorial Hospital in Easton, Maryland, she was a loving wife, sister, aunt, and cousin. She was generous, kind, and a friend to all. A lifelong resident of Bozman, she was the daughter of Clyde and Mary Louise Brown. On November 13, 1965, she married the love of her life, Vernon Lee Hammed, whom she described as her best friend, supportive, intelligent, humorous, family oriented, caring, respectful and loving. She is survived by her brother Ralph Brown and his wife Joann of St. Michaels, her niece Susan Teneza and her husband Eric of Lutherville and her great nieces Miria Teneza of Sterling, VA, and Temari Teneza of Lutherville, as well as many cousins, nieces, and nephews. She graduated from St. Michaels High School in 1962. She was looking forward to her upcoming 60-year class reunion in May. She truly enjoyed connecting with people and looked forward to events such as the alumni reunion to catch up with everyone. After high school, she attended Towson State University and later began her career as a lab technologist with Dupont in Wilmington, DE in 1966. Later, she would find her calling with the Maryland Department of Natural Resources. She worked at the Oxford Lab as a marine histologist for several years where she would find her passion for helping preserve the ecology of the Chesapeake Bay. It was at the Oxford Lab that she met some of her closest friends. She returned to Towson University in the late eighties where she earned her Bachelor of Science degree, Cum Laude, in Mass Communications. Upon earning her degree, she continued her career with the Department of Natural Resources in Annapolis as an Administrative Officer. Janet took an early retirement from the state in 1995 to care for her mother who suffered from dementia and Alzheimer's disease. Janet loved live music and loved to sing and dance. She wrote a play with her best friend Sally Otto for the Talbot Little Theatre in the late 1970's called "Talbot Tales." She was a wonderful cook and loved to host family dinners and other events at her home in Bozman. She enjoyed a good political discussion whether it was with someone who agreed with her view or not. Throughout her life, Janet has been impassioned to help others. She was an advocate against elder abuse and spent much of her time helping victims receive justice. Janet was dedicated to her faith and her relationship with Christ, and she truly had a servant's heart. She was a lifelong member of the Bozman United Methodist Church. She was involved with the Alzheimer's Association, Talbot Democrats, Towson University and many other organizations. She was committed to helping the environment particularly the Chesapeake Bay. She was the Village Center Board representative for Bozman for several years. She was a member Miles River Yacht Club Ladies Auxiliary and a past princess of the Miles River. A viewing will be held at the Framptom Funeral Home - Ostrowski Chapel, 312 South Talbot Street, St. Michaels, on Monday, March 28, 2022 from 6pm - 8pm. Funeral services will be held at the Bozman United Methodist Church, Bozman, MD on Tuesday, March 29, 2022 at 11:00am, where a viewing will be held from 10am until 11am. Burial will be in the Bozman Cemetery immediately following her service. Memorial donations may be made to the St. Michaels Volunteer Fire Department, 1001 S. Talbot Street, St. Michaels, MD. 21663. (Please visit www.framptom.com for on line condolences).

Janet Brown Hammed passed away peacefully at her home in Bozman, Maryland on Saturday, March 19, 2022. She was 77 years old. Born August 8, 1944 at Memorial Hospital in Easton, Maryland, she was a loving wife, sister, aunt, and cousin.... View Obituary & Service Information

The family of Janet B. Hammed created this Life Tributes page to make it easy to share your memories.

Janet Brown Hammed passed away peacefully at her home in Bozman,...