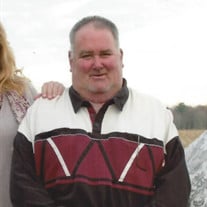 Jeffery Robert Culhane, fondly known as "Bubba", passed away on Wednesday, May 12, 2021 at Tidal Health in Seaford, DE. He was 62. He was born on November 21, 1958, the son of Peggy Meredith Culhane and the late Robert Lee Culhane. He graduated from Colonel Richardson High School with the class of 1976 and went on to work with Southern States for many years. Farming was his first love as he began working on his grandparent's farm at the age of 7. He worked for several different farmers over his lifetime. While growing up he was in 4-H showing his prizing winning Holsteins during the summer. In his time outside of work he enjoyed go cart racing, NASCAR, Sprint cars, dirt track and local racing. He also had a collection of John Deere tractors, NASCAR memorabilia and "hats". Jeff will fondly be remembered for his gift of gab, sense of humor, kind heart and gentle soul. He is survived by his daughter Jennifer Giordano (Jason), grandchildren, Vincent and Victor, mother, Peggy Culhane, siblings, Joy Lynn Watts, Regina Culhane (Bartley Knox), Benjamin Culhane (Donna), and Paige Chance (C.R.), his former wife, Penny Harris, close friends, David, Doris, Allison, and Justin McCreary, and a host of aunts, uncles, cousins, nieces, nephews, great-nieces and great-nephews. He was preceded in death by his father, Robert Lee Culhane, and grandparents, William and Esther Meredith, and Leo and Carrie Culhane. A funeral service will be held on Saturday, May 22, 2021 at 1pm at Framptom Funeral Home in Federalsburg, MD with his good friend Scott Morris officiating. Friends may call on the family from 12-1pm prior to the start of the service. Interment will be held at Chestnut Grove Cemetery in Federalsburg, MD immediately following the service. In lieu of flowers memorial contributions may be made to St. Jude Children's Research Hospital at www.stjude.org/donate. Services entrusted to the Framptom Funeral Home. Share memories with the family at www.framptom.com.

Jeffery Robert Culhane, fondly known as "Bubba", passed away on Wednesday, May 12, 2021 at Tidal Health in Seaford, DE. He was 62. He was born on November 21, 1958, the son of Peggy Meredith Culhane and the late Robert Lee Culhane. He graduated... View Obituary & Service Information

The family of Jeffery Robert Culhane created this Life Tributes page to make it easy to share your memories.