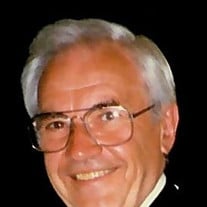 John Corsi, 85, passed away on March 13th, 2021 surrounded by his devoted wife of 62 years and his children at his beloved home on the Miles River in Saint Michaels Maryland. Born on May 7, 1935 in Boston Massachusetts, John was the proud descendent of Italian and Irish immigrants, John and Catherine (nee Nagle) Corsi. After graduating from Kingston High School, John attended the University of Massachusetts, where he majored in electrical engineering, later earned an MBA from Northeastern University, and served a two-year stint in the Marines. When once asked if Paris Island, where he attended boot camp, was a resort, he laughed and retorted that generations of Marines were rolling over in the graves. John met his future life partner Linda Joan Boutin while on leave from the Marines. They began dating after his discharge, and she joined him on a lasting life adventure that included raising four children and relocating fifteen times across five states. John had a successful business career with The Standard Oil Company, Foxboro Company, Analog Devices, and finally the Solarex Corporation, where he served as President and CEO. John was an acknowledge expert in the field of solar energy, testifying on alternative energy sources before Congress on several occasions. Upon retirement from corporate life, John developed a whole new set of talents, becoming a self-taught investor. He proudly kept track of his performance, consistently beating the Standard & Poor's index over the next 27 years. For the past two decades, John reveled in his role as family patriarch, congenially hosting an annual, sprawling, multi-generational 4th of July celebration with family and friends that sustained the bonds among his far-flung family. John retained his boundless intellectual curiosity throughout his life, delving into wide-ranging topics in technology, history, philosophy, photography and politics with enthusiasm and insight. He loved wine and pasta, jazz, and playing golf in his men's leagues in both Saint Michaels and Naples, Florida, where he perpetually bemoaned his very respectable scores. A child of the depression, he took budgets and home repairs projects to a level that bordered on insanity, yet he was endlessly giving and generous with those whom he loved. John is survived by his wife Linda, his children Kathleen, Mark and Brian, his son-in-law Mark Cosby, his grandchildren Jenna and Brett Cosby, Drew, Nick and Owen, and his brother James. He is predeceased by his son, John, and his brother Paul. We will hold him in our hearts, with an enduring image of him relaxing on his back porch, swirling a glass of Pinot Grigio while listening to Ella Fitzgerald, and watching a beautiful, fiery sunset over the Chesapeake Bay. Due to the ongoing pandemic, burial services will be private. In lieu of flowers, donations in his memory can be make to the Packard Center, ALS Research of John Hopkins, 750 East Pratt Street, 17th floor, Baltimore, Maryland 21202. Arrangements are entrusted to Framptom Funeral Home- Ostrowski Chapel of St. Michaels, MD. For an online guest book, please visit www.framptom.com.

John Corsi, 85, passed away on March 13th, 2021 surrounded by his devoted wife of 62 years and his children at his beloved home on the Miles River in Saint Michaels Maryland. Born on May 7, 1935 in Boston Massachusetts, John was the proud descendent... View Obituary & Service Information

The family of John Corsi created this Life Tributes page to make it easy to share your memories.