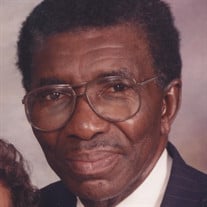 Deacon John D. Hill was born on June 8, 1923, in Carrsville, VA. Our beloved husband, father, brother, uncle, cousin and friend went home to be with the Lord on Tuesday, May 8th, 2018. John D was the oldest living grandchild of the late Archer and Anna Hill and the son of late Daniel and Clara Hill. After Clara’s death he was raised by his father’s sister Anna (a.k.a. Annie) Hill who also raised his sisters Thelma and Eunice. At Anna’s request she told them to call her mom and from that day on she was known as Mom Annie. John D was educated in Isle of Wight County, VA prior to moving to Maryland Eastern Shore. He was an avid reader, a notable conversationalist, and a life-long learner. John D. enlisted in the United States Army on February 4, 1943 during WWII and served two years receiving an honorable discharge at the rank of Sergeant. In 2009 author James Diehi wrote a book “World War II Heroes of Southern Delaware” and reference John D in a section. He started his working career with Service Trucking in Federalsburg becoming the first Black Recording Secretary of the Teamsters Union in Salisbury, MD. John D later moved to Brooklyn New York, where he worked for 28 years with the New York Transit Authority as a bus operator. On January 18th, 1952 he was joined in Holy matrimony to Melva A. Crumble-Sampson and they were married for 66 years. They resided in Brooklyn, New York for more than 40 years before retiring and relocating to Seaford, DE. John D accepted Christ at Zion Baptist Church in Brooklyn, NY and was elevated to the office of Deacon. After retiring and moving to Seaford, he transferred his membership to Mt. Olive Baptist Church in Bridgeville, DE where he served faithfully until his health began to fail. John D. became interested in homeopathic medicine and was later known as “Dr. Hill” and “Herb Doctor.” In addition to his devoted and loving wife Melva, he is survived by his son John Damian (Naydean) of Seaford, DE., two sisters Yvonne Olds of Virginia Beach, VA and Kathleen Maddin of Baltimore, MD., two special nephews Alvin Gregory (Carol) McCray of Gaithersburg, MD and Joseph Leroy (Denise) McCray, of Catonsville, MD, a loving niece and devoted caregiver till the end, Tracy (Moses) Grubbs, of Berlin, MD, and special niece Wanda (Danny) Molock of Denton, MD. Two grandchildren Shykia Roach and Damian Hill both of Seaford, DE and a host of nieces, nephews, cousins, and many, many friends.

Deacon John D. Hill was born on June 8, 1923, in Carrsville, VA. Our beloved husband, father, brother, uncle, cousin and friend went home to be with the Lord on Tuesday, May 8th, 2018. John D was the oldest living grandchild of the late Archer... View Obituary & Service Information

The family of John Daniel Hill created this Life Tributes page to make it easy to share your memories.