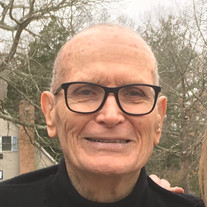 John Keithley "Jack' Ryan of Easton died at Candlelight Cove, Easton on Monday December 13, 2021. He was 90. Born in Baltimore on July 9, 1931 he was the son of the late John Keithley Sr. and Agnes Courtney Ryan. Jack grew up in Baltimore, where he attended St. Dominic Catholic School. He later went to City High School, and after attending school he went to work for the Bendix Corp. for a brief time. In 1953, he married Margaret Gannon and raised 4 children. They eventually settled in Linthicum, Md where they called home. He took a position with the Pennsylvania Railroad (later Amtrak), where he worked until his retirement in 1989. Following his retirement, he and his wife, the former Margaret Gannon, moved to Seaford, DE, until Mrs. Ryan's death in November 2020. Mr. Ryan, or Jack as he was known by all, was happiest when all the family was together. In his spare time, he enjoyed his vegetable garden and spending his time "tinkering". He also liked being on the water crabbing and fishing - teaching his children the love of the water. His greatest memory to the family was his love of dessert buffets and collecting A LOT of books. Mr. Ryan is survived by four children: Deborah Albright (Richard) of West Chester, PA; Timothy Ryan (Chris) of Pasadena, MD; Karen Beazell (John) of Potomac Falls, VA; and Andrew Ryan of Millington MD. He is also survived by a cousin, Shirley Cockey of Clairborne, MD, as well as nine grandchildren: Mark, Jennifer, Jason, Ivanna, Nicholas, Kaitlin, Courtney, Olivia, Sam; two great-grandsons, Henry, and Jack, and his beloved companion "Nutmeg." A graveside service will be held at 11:00AM, on Thursday December 16, 2021 at the Olivet Cemetery, St. Michaels, MD. Donations may be made to the; Talbot County Humane Society, 7894 Ocean Gateway /P.O. Box 1143, Easton, MD. 21601. Arrangements are entrusted to the Framptom Funeral Home-Ostrowski Chapel, St. Michaels. (www.framptom.com)

John Keithley "Jack' Ryan of Easton died at Candlelight Cove, Easton on Monday December 13, 2021. He was 90. Born in Baltimore on July 9, 1931 he was the son of the late John Keithley Sr. and Agnes Courtney Ryan. Jack grew up in Baltimore,... View Obituary & Service Information

The family of John K. Ryan created this Life Tributes page to make it easy to share your memories.