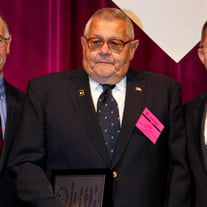 John "Jack" Clark Taylor, of Seaford, DE, passed away on April 15, 2022, at Bay Health Sussex Hospital in Milford, DE. He was 86. He was born on August 4, 1935, in Smithville, MD, the son of the late John and Evelyn Bullock Taylor. He was raised in Federalsburg, MD and graduated from Federalsburg High School with the class of 1953. After graduating he worked with his father transporting tomatoes from Georgia to Maryland until he joined the Army from 1957 thru 1959. During his time in the Army, he was stationed in Germany. Following his return home, he worked for several different trucking companies, which began his lifelong career as a truck driver. He retired from trucking as a driver with Draper King Cole in Milton, DE. Upon retiring, he began working for Delaware Technical and Community College as an instructor for their truck driving CDL program. He worked as an instructor for 13 years. He was a past president of the Delaware Motor Transport Association, and an active volunteer with the National Truck Driving Association for which he received a Lifetime Volunteer Award. He served as a 4-H leader with his wife for the Seaford Blue Jays 4-H Club, and as a leader and Link Member for Sussex County 4-H for over 40 years. He was instrumental in establishing the Younger Member Weekend, and always enjoyed attending 4-H events. He was also a member of the Pizza King Coffee Club. You could often find him early mornings solving the problems of the world with his Coffee Club buddies at the Round Table. He enjoyed spending time with his family and attending his grandchildren's sporting events and activities. He was very proud of all of them. He is survived by three daughters, Karen Levesque of Fredericksburg, VA and companion Kenny Conaway, Jacalyn Bradley of Seaford, DE, and Janelle Koski and her husband Greg of East New Market, MD, seven grandchildren, John Levesque and his wife Holley, David Levesque, Amy DeLong and her husband Alex, Nathan Bradley, and fiancée Caitey Tharby, Shannon John and her husband Robbie, Cole Koski, and Jill Koski, and a niece Patti Holland of Federalsburg, MD. He is preceded in death by his wife of 53 years, Barbara Faye Meredith Taylor, a brother James "Jim" Taylor, and son-in-law, Kenneth Levesque. A funeral will be held on Friday at 11:00 at the Framptom Funeral Home in Federalsburg with the Rev. Denzil T. Cheek officiating. Interment will follow in Hill Crest Cemetery in Federalsburg. The family will receive friends on Thursday evening from 6:00 to 8:00 and one hour prior to the service on Friday. Expressions of sympathy may be made to the Sussex County 4-H, Carvel Research and Education Center, 16483 County Seat Highway, Georgetown, DE, 19947. Share memories with the family at www.framptom.com

John "Jack" Clark Taylor, of Seaford, DE, passed away on April 15, 2022, at Bay Health Sussex Hospital in Milford, DE. He was 86. He was born on August 4, 1935, in Smithville, MD, the son of the late John and Evelyn Bullock Taylor. He was... View Obituary & Service Information

The family of John Clark Taylor created this Life Tributes page to make it easy to share your memories.