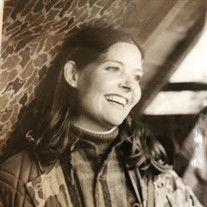 Judith Burchett Reeside, 77, of Bozman, passed away on October 19, 2019 at the Peninsula Regional Medical Center in Salisbury, MD. Judy was born in Camden, NJ on July 28, 1942 and was the daughter of Major Harry P. and Ruth Adams Burchett. Judy’s love affair with the Eastern Shore began as a young child and teenager, spending countless hours in the summers with her Mother’s best friend, Marie Jackson in Queen Anne, MD. The Jacksons, became her dearly loved “adopted“ family and those relationships became a central part of her life and her love of the Eastern Shore. As an “Army brat”, Judy resided in Honolulu, Hawaii, Ft. Myer, VA, and Haiti. The family moved to Roslyn and then to Willow Grove, PA and Judy graduated from Upper Moreland High School in 1960. Upon graduation, Judy entered the McQueen Gibbs School of Nursing at the Memorial Hospital in Easton, MD while living with her Aunt Marie and Uncle Joe Jackson in Queen Anne. While a student nurse, Judy was voted Miles River Yacht Club’s “Miss Miles River” in 1961, further cementing her Eastern Shore connection. She left nursing school in 1962 to marry Gordon Behrens, of Cordova, MD. They divorced in 1968. Her daughter Alison was born in 1963 and Marcy in 1966. As a single parent, she worked for several years, supporting her young family as Executive Secretary to the President of the newly founded Chesapeake College and, later, as Administrative Assistant to the Chesapeake Bay Maritime Museum’s first Executive Director, Jim Holt. Judy married Sidney Dickson in 1974, moving to Lake Tahoe, Nevada. Her youngest daughter, Eliza was born in Reno Nevada. Returning to the Eastern Shore, the family settled in St. Michaels, MD. Her second marriage ended in 1981. After being cast in The Talbot Little Theater’s production of “You Can’t Take it With You” with Arthur G. (Chip) Reeside, Jr. (ironically as husband and wife), they married in 1983 forming a blessed and loving partnership that lasted 36 years. Judy was successfully able to manage the “blended” family that consisted of her three daughters, a step-daughter, Michelle Reeside, and a step-son, Scott Reeside, while working as a pre-school teacher at the St. Luke’s Methodist Church Nursery School in St. Michaels. She later worked as a bookkeeper for an Easton accounting firm, managed SweaterWorks in St. Michaels and was a partner in a successful St. Michaels specialty shop, The Paper Moon, eventually becoming the out-right owner. After her store closed, she worked as a Bookkeeper and Sales Associate in the The Blue Swan Christmas Shop for many years. Judy’s many other avocations and interests included: supporting and occasionally sailing on Chesapeake Bay Log canoes; volunteering as a Court Appointed Special Advocate (CASA) for Talbot County’s disadvantaged children; and volunteering for many years at the St. Michaels branch of the Talbot County Library. Judy had been a member of the Bay Hundred Community Emergency Response Team (CERT) since its inception in 2010. She was a long time member of Christ Episcopal Church in St. Michaels and for the last 19 years she was an active member and Lay Leader of the Neavitt United Methodist Church. Judy was an avid reader of fiction, biographies, mysteries (and any other written word), loved theater, musicals, PBS and music (especially Patsy Cline and Johnny Cash). She loved interior decorating and staging, and had a keen eye for color and composition. She loved to paint, was an avid gardener, played Mahjongg and agonized over the fortunes of the Washington Redskins. Judy is survived by her husband Arthur G. Reeside, Jr., daughters, Alison Behrens, Marcy Behrens Williams (Scott), Eliza Dickson, step-children Michelle Reeside Koll (Rich), Scott Reeside (Amy), grandchildren James Behrens, Emily, Carter and Campbell Williams, step-grandsons Noah, Tristan and Hayden Reeside, sister Linda Burchett Blythe (Duke), brother Lawrence Burchett, nephew Robert Burchett and her beloved dog and faithful companion Scout. She was preceded in death by her parents and her brother, Jeffrey Burchett. A memorial service will be held at Christ Episcopal Church in St. Michaels at 1 P.M. on Saturday, November 23rd to be followed by a celebration of life at the Miles River Yacht Club. In lieu of flowers, donations are encouraged to support the services to the community provided by the wonderful and dedicated men and women of the St. Michaels Volunteer Fire Department and rescue unit. Her family is extremely grateful for their efforts on her behalf. Arrangements are entrusted to the Framptom Funeral Home- Ostrowski Chapel, St. Michaels. www.framptom.com

Judith Burchett Reeside, 77, of Bozman, passed away on October 19, 2019 at the Peninsula Regional Medical Center in Salisbury, MD. Judy was born in Camden, NJ on July 28, 1942 and was the daughter of Major Harry P. and Ruth Adams Burchett.... View Obituary & Service Information

The family of Judith Burchett Reeside created this Life Tributes page to make it easy to share your memories.

Judith Burchett Reeside, 77, of Bozman, passed away on October...