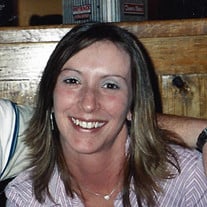 Julie Bell Whitby of Seaford, DE, passed away on Saturday, November 17, 2018 at her home. She was 41. She was born on August 27, 1977 in Easton, Maryland the daughter of Bonnie Bell Christiani and the late Edward Wallace Bell, Stepfather Earl Christiani. During school, she played the clarinet for eight years, and in her senior year, she was a drum major. She graduated with honors in 1995 from North Dorchester High School, in Hurlock, MD. After graduation, she was crowned Miss Dorchester County Farm Queen. She then attended Del Tech for her certification in the Pharmaceutical field. She married Robert Whitby on May 24, 2008 and they made their home in Seaford. She worked at the Drug Store in Hurlock as a Pharmaceutical Technician for 23 years. She was a member of the Dorchester County Relay for Life. She enjoyed spending time with her children and family, making crafts, and trips to the beach. Julie was so well loved by so many people because of her glowing personality. She is survived by her husband, Robert Whitby of Seaford, two sons, Connor Spedden and Brooks Whitby, her mother Bonnie Bell Christiani and her husband Earl of Hampstead, Maryland, two sisters, Trisha Bell Bryan and her husband Ronnie of East New Market, and Cathie Bell Rippons and her husband Eldridge of Hoopers Island, three aunts, Kitty Cannon and her husband William of Cambridge, Sharon Harris and her husband Eugene of Preston and Brenda Windsor and her husband William of East New Market, one uncle, Charles Moore and his wife Cathy of Madison, two nephews, Brenton Bryan of East New Market and Jason Love of Baltimore and her “un-biological sisters”, Christy Coulborne Medford, Sheila Watson Adkins & Megan Willey Brown. She was preceded in death by her paternal grandparents, Margaret & Wallace Bell, maternal grandparents Ruth and Darcy Moore, and her “un-biological sister” Stephanie Collins Merritt. A memorial service will be held on Friday, November 23, 2018 at 7:00 at the Framptom Funeral Home in Federalsburg. The Reverend Jim Michaels will officiate. The family will receive friends from 5:00 to 7:00 Burial will be private. Expressions of sympathy may be made to the Sarcoma Foundation, Post Office Box 98160, Washington, DE 20090 or to the Dorchester County Relay for Life, C/O Ms. Christine Foxwell, 3315 Landrum Drive, East New Market, MD 21631. Share memories with the family at www.framptom.com

Julie Bell Whitby of Seaford, DE, passed away on Saturday, November 17, 2018 at her home. She was 41. She was born on August 27, 1977 in Easton, Maryland the daughter of Bonnie Bell Christiani and the late Edward Wallace Bell, Stepfather... View Obituary & Service Information

The family of Julie Bell Whitby created this Life Tributes page to make it easy to share your memories.