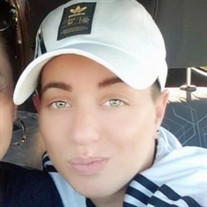 Kaila Kathryn Gowe of Wittman died unexpectedly, on Friday, May 14, 2021. She was 33 years old. Born at Johns Hopkins Hospital on April 12, 1988. She was the daughter of Lonnie Gowe of Wittman, and Donna Tucker of Ridgely. Kaila grew up in the Bay Hundred area and attended public school in St. Michaels and Easton, where she graduated from. Following her graduation from High school, she attended Chesapeake College where she received an Associate's degree in Business. At the time of her passing she was pursuing her B.S degree on-line. Kaila worked tirelessly at various jobs, but she mostly loved working on the water with her father, which she was doing until her untimely passing. Kaila was passionate about sports of all kinds. From the time she was a child she played softball, basketball, ice hockey, and snowboarding. She played for The Bayside Breeze and the Delaware Magic. When she was 7 years old she played the Home Run Baker League, the team was awarded 2nd in the Nation. In addition to her parents, she is survived by her sister; Bailey Gowe Willey, her brother; L.J. Gowe, both of Wittman, Maternal Grandmother; Rainy Tucker of Tilghman, her paternal Grandmother Jan S. Watts and Pop-Pop Steve Watts of St. Johns Fl. Also, paternal uncle Randy and aunt Theresa Gowe. Her cousin Heather Brummell of Cordova, and cousin's; Nicole Sadler, Billy Miller, and Randy "Lil Rand" Gowe. Also, her God parents; Ann and Edward Gowe. She is preceded in death by her paternal grandfather Ronald Gowe, Sr (Penal) and Uncle Toby Gowe. Services will be held at St. Johns Chapel, Tilghman on Friday, May 21st at 2:00 PM. Burial will be in St. Johns Cemetery, Tilghman, MD. In lieu of flowers, donations in Kaila's name can be sent to Midshore Restoring Hope in Women @ 12400 River Rd. Ridgely, MD 21660 Arrangements are entrusted to the Framptom Funeral Home- Ostrowski Chapel, of St. Michaels. Please visit www.framptom.com for on-line condolences.

Kaila Kathryn Gowe of Wittman died unexpectedly, on Friday, May 14, 2021. She was 33 years old. Born at Johns Hopkins Hospital on April 12, 1988. She was the daughter of Lonnie Gowe of Wittman, and Donna Tucker of Ridgely. Kaila grew up in... View Obituary & Service Information

The family of Kaila Kathryn Gowe created this Life Tributes page to make it easy to share your memories.

Kaila Kathryn Gowe of Wittman died unexpectedly, on Friday, May...