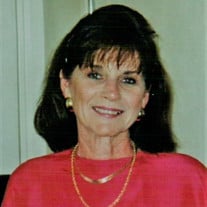 Katherine T. Mourlas, (Kitchie) age 77, of St. Michaels, passed away on October 17, 2018. She was born in the Bronx, New York on October 16, 1941 to the late Robert Thornby and Katherine Thornby. She had a wonderful marriage of 55 years to James C. Mourlas (Jim) and he still survives. Also surviving are three sons—Jimmy Mourlas (Kim), Chris Mourlas (Jean) and Rob Mourlas (Courtney) and one daughter, Kati Cole (Joe). She was also blessed with 10 grandchildren and she has 6 younger sisters and an older brother and many, many beloved cousins, nephews and nieces and in laws. Kitchie spent part of her early childhood in Gander, Newfoundland where her dad, Robert, was stationed for TWA. Later she attended Uniondale High School in New York and after graduation attended Brown’s Business School. She worked several years in commissary operations for TWA at JFK before settling down and raising a family. In later life she was a volunteer at Saint Peter and Paul School, and the Waterfowl Festival. She also worked for several years at the Easton Chamber of Commerce, making lifelong friendships with Barbara Ortt, Gayle Keen, and Donna Kostens. Kitchie loved to garden, she enjoyed tap dancing and she loved to travel. Accordingly, she took full advantage of her TWA airline passes traveling around the country and the world with friends and colleagues. She often accompanied her husband on business trips taking in most of Europe several times and one memorable trip to South America. To complete her jet setting she attended a good friend’s (Berntsen) wedding in Sydney, Australia Family and friends were Kitchie’s passion and delight. For many years the family and friends spent summertime each year at Brandt Lake in upstate New York—the Berntsens, the Kerrs and the Neilsons became lifelong friends. She also spent many enjoyable winters with friends and sisters in Bradenton, Florida. Kitchie was a member of the Harbourtowne Country Club where she played golf and tennis. She was also a past member of the Miles River Yacht Club. At Kitchie’s request, a celebration of her life will take place at the Miles River Yacht club in St. Michaels starting at 12 noon on Sunday November 4th. The family wishes to thank all of those who cared for her during her last few months, particularly Amber McKewen who served the family night and day as her primary caregiver. In lieu of flowers memorial contributions may be made to the Talbot Hospice Foundation, 586 Cynwood Drive in Easton MD 21601. Arrangements are being made by the Framptom Funeral Home in St. Michaels, MD. Share memories with the family at www.framptom.com

Katherine T. Mourlas, (Kitchie) age 77, of St. Michaels, passed away on October 17, 2018. She was born in the Bronx, New York on October 16, 1941 to the late Robert Thornby and Katherine Thornby. She had a wonderful marriage of 55 years to... View Obituary & Service Information

The family of Katherine Mourlas created this Life Tributes page to make it easy to share your memories.