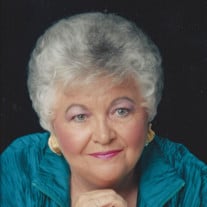 Kathleen Windsor of Federalsburg, known fondly as "Kitty" and "Miss Kitty" passed away on Friday, March 30, 2018 at Mallard Bay Nursing Home in Cambridge surrounded by her family. She was 87. She was born in Berlin, MD on July 17, 1930 the daughter of the late Lorraine Pennewell Jarmon and William Warner Jarmon. Kitty was preceded in death by her husband, Earle B. Windsor, Jr. on January 8, 1990. Kitty graduated from Buckingham High School in Berlin with the class of 1947. She started her working career as a telephone operator in Berlin and then worked at J.E. Rosser, Service Trucking, and A.W. Sisk and Son. She was a member of Christ United Methodist Church and Union United Methodist Church both in Federalsburg where she was a faithful volunteer. Kitty also was a member of Federalsburg VFW Post 5246 where she volunteered along with Caroline Hospice in Denton. She also enjoyed working for the local Republican committee and the Richard Coulbourne Campaign. Kitty loved to watch ice skating, going to music concerts, loved to travel the world, and spending time with her friends. Kitty is survived by two sons, Earle Blaine Windsor, III and his wife, Mary of Secretary, and Robert Allen Windsor and his wife, Lisa of Secretary, four grandchildren, Robert "B.J." Windsor, Jr. and his wife Brandi of St. Louis, Ronnie Windsor and his fiance', Whitney Marshall of Galestown, Bobby Andrews and his wife, Nicole of Salisbury, Barbie Willey and her husband, Rob of North Carolina, six great great-grandchildren, Alexis Windsor, Adelyne Windsor, Raelyn Windsor, Hunter Willey, Jacob Willey, Addison Andrews, a sister, Natalie Jarmon of Chesterfield, VA, an adopted daughter, Peggy McMahan Fuller of Easton, and several nieces and nephews. She was also preceded in death by a brother, William W. Jarmon, Jr. Funeral services will be held on April 5, 2018 at Framptom Funeral Home in Federalsburg at 11 a.m. Interment will take place at Evergreen Cemetery in Berlin, MD. A visitation with the family will be held on Wednesday evening from 6-8 p.m. at the funeral home and one hour prior to the service. Serving as pallbearers will be David Welch, Jeff Burnette, Rick Hudson, Bobby Andrews, Ronnie Windsor and Mike Wickline. In lieu of flowers memorial contributions can be made to Federalsburg Volunteer Fire Company, PO Box 99, Federalsburg, MD 21632 or to the Arthritis Foundation, 9891 Broken Land Parkway, Suite 101, Columbia, MD 21046.

Kathleen Windsor of Federalsburg, known fondly as "Kitty" and "Miss Kitty" passed away on Friday, March 30, 2018 at Mallard Bay Nursing Home in Cambridge surrounded by her family. She was 87. She was born in Berlin, MD on July 17, 1930 the... View Obituary & Service Information

The family of Kathleen Jarmon Windsor created this Life Tributes page to make it easy to share your memories.

Kathleen Windsor of Federalsburg, known fondly as &quot;Kitty&quot; and...