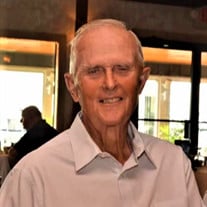 After 86 years of service to his family, community, and our Lord, Kenneth Fishell, Sr. passed away at home on October 16, 2021. Kenneth was a graduate of Federalsburg High School, where he enjoyed playing soccer and basketball. He followed his passion for soccer after high school, playing in the Eastern Shore Men's League until his late thirties and then coaching youth soccer. He rarely missed a grandchild's or great-grandchild's soccer game. He was even seen at a high school game, just two weeks before his last whistle blew. Kenneth started farming as a teenager, helping his parents, Russell and Mary Virginia Fishell, and grandparents, Oscar and Elsie Fishell, before and after school. On a rainy February 14, 1959 Kenneth married Barbara Lowe. The rain brought much luck to them, as they celebrated 63 years of love in marriage this year. Shortly after their marriage, Kenneth and Barbara moved to the home of his grandparents, The Fishell Homestead, which has since been recognized as a Maryland Century Farm. Kenneth spent many years in the fields and in his chicken houses, and found great pride in his antique tractor collection. His favorite was a restored 1929 Case L, which belonged to his grandfather and has toted many grandchildren and great-grandchildren in the annual Eastern Shore Threshermen Association antique tractor parade. He was also recognized by the Threshermen Association in 2020 for Lifetime Service to the organization. When he wasn't farming, he enjoyed hunting deer and rabbits. He was a founding member of the Marshyhope Rod and Gun Club and enjoyed running his beagles at the Woodland Ferry Beagle Club. Serving the community he grew up in was important to Kenneth. He was a charter member of the Idlewild Ruritan Club, where he served as Past President and Zone Governor. His family's sausage recipe has been used for many years by the club for their sausage fundraiser sales, the proceeds of which have greatly benefited our community. Kenneth also was a devoted member of Chestnut Grove Community Church, where he spent many years as an usher, singing in the choir, and caring for the grounds. He also loved the Chestnut Grove Community Association and enjoyed serving as auctioneer during their fundraiser dinners. Kenneth is survived by his wife, Barbara, son Kenny Jr. (Sabrina), son Kevin (Eve), and daughter Karen Newcomb (Jimmy), all of Federalsburg. He is also survived by grandchildren Kenny Fishell III (Kayla); Kit, Kassidy, and Karley Fishell; Davis and Caroline Newcomb; and great-grandchildren Olivia, Ryleigh and Branch Fishell. He was preceded in death by his parents and brother, Levin. A funeral service will be held at Framptom Funeral Home in Federalsburg on Saturday, October 23 at 1pm with Pastor Marie Coulbourne officiating. Friends may call on the family from 11-1pm prior to the start of the service. Interment will be held at Hill Crest Cemetery in Federalsburg, MD immediately following the service. In lieu of flowers, memorial contributions can be made to Chestnut Grove Community Association, Attention to Peggy Culhane, 5170 Long Swamp Road, Federalsburg, MD 21632.

After 86 years of service to his family, community, and our Lord, Kenneth Fishell, Sr. passed away at home on October 16, 2021. Kenneth was a graduate of Federalsburg High School, where he enjoyed playing soccer and basketball. He followed... View Obituary & Service Information

The family of Kenneth Harrison Fishell, Sr. created this Life Tributes page to make it easy to share your memories.

After 86 years of service to his family, community, and our Lord,...