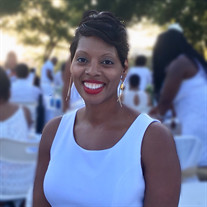 Silver Springs, MD- Kowana Lysha Woolford, lovingly known as “Kokoa” to close friends and family was born on May 19, 1980 to Regina Denise Matthews, and Lester Darnell Matthews in Hurlock, Maryland, passed away on Saturday, April 21, 2018 at Suburban Hospital in Bethesda, MD. She was 37. Kowana attended Solomons AUMP Church in Williamsburg, Maryland where she grew her faith and love for Jesus. She graduated from North Dorchester High School in, MD (1998). While at North Dorchester High School, Kowana was a member of the Lady Eagles Girls Basketball Team. She was awarded player of the year in 1998 after scoring 1017 points and 1100 rebounds during her three years on the team. She continued her education at Bowie State University, where she earned a Bachelors degree in Business (2002) and University Maryland University College where she earned a Masters of Science in Human Resource (2007). While attending Bowie State University, Kowana became a member of Zeta Phi Beta Sorority, Incorporated and became very active in community service and mentoring. She was also a member of the sorority’s championship step team, The So Sweet Steppers. Upon graduation from Bowie State University, Kowana began working in the field of Human Resources and went on to become the Vice President of Human Resources at Pacific Western Bank. On April 28, 2007, Kowana married the love of her life, Damon Cojuan Woolford. From this union they had three beautiful children. Kowana adored her children and loved being a mother. Kowana was a very loving and lovable person who always had a smile on her face. She was fondly known to her friends and family as Kokoa; and to a select few she was an “E.F.” which stood for Everybody's Friend. Kowana loved spending time and vacationing with her family. She loved eating crabs and had a kid like obsession for candy. She is survived by her husband, Damon Woolford, her children, Damon Nicholas Aidan Woolford (age 8) , and Skylar Katherine Woolford (age 4); her mother Regina Denise Matthews, her father Lester Darnell Matthews; two siblings, Adrian Matthews and Darnell Matthews; her mother in-law Pandoria Woolford, father in-law Randolph Carlton Young, sister in-law Nailah Woolford and brother in-law Reno Hines, her grandmothers Thelma Butler and Ophelia Matthews, and a host of aunts, uncles, nieces, nephews and cousins. Special recognition to De’Ronte’ Smith who was more like a brother than a cousin. She was preceded in death by her son, Damon Nicholas Woolford, and her grandfathers, Thomas Matthews and James Butler Sr. Funeral services will be held at Easton Church of God in Easton, MD, on Saturday, April 28, 2018 at 1pm with Pastor Tambara Stewart officiating. Friends may call on the family from 12-1pm prior to the start of the service. Interment will be held at Coppins Cemetery in Preston, MD, following the service. Services entrusted to the Framptom Funeral Home, Federalsburg. Share memories with the family at www.framptom.com https://www.gofundme.com/kowana-woolford-memorial-fund

The family of Kowana Lysha Woolford created this Life Tributes page to make it easy to share your memories.