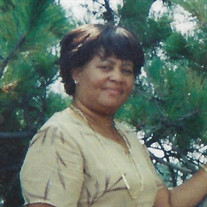 Laura Christine Jenkins-Carter was born on June 19, 1965 to Frank Linwood Jenkins Sr. and the late Alberta Jeanette Jenkins in Seaford, DE. To this union were born 6 children. She was the second oldest and the “only” girl of 5 boys. Laura, affectionately known as “Chrissy” was educated in the Seaford School District, and graduated from Seaford Senior High School in 1984. She went on to attend Delaware State University. Chrissy loved helping others and later went on to obtain her certification in nursing. She had many, many stories of the people she cared for; many of which were often hilarious. She worked for the Stockley Center as well as Delmarva Community Services; working with people with disabilities, and supervising numerous group homes. Chrissy also ran a daycare from her home when she resided in Salisbury, MD. She had a heart of gold and her sense of humor was therapeutic. Chrissy was a good listener; you could go to her about anything. She was like the information highway before there was the internet. She always knew who to call or where to send you to get what you needed, and always managed to make you smile in the process. Chrissy loved to travel. As long as she had a set of wheels, whether it was yours or mine, she was willing to ride. Among other things Chrissy loved to eat and to go to yard sales. She would often say “C’mon Taylor, get up we going yard saling!” Above all Chrissy loved her family and loved going to church. One of her favorite things to do in the church was to sing. She could be found singing any one of her favorite songs during service “We Are Standing on Holy Ground”, “Totally”, or “I Won’t Complain”. Chrissy grew up at Clarence Street Church of God, where she was a member of the choir, and went on to become the choir director as well as youth director. She continued her work at Clarence Street Church of God until she was called out into outreach ministry. She became a member of Christian Outreach Ministries under Pastor Tony Morris. She worked diligently helping others, a trait she inherited from her mother. Chrissy worked in the church’s shelter and thrift store. She also served as the praise and worship leader, choir director, and praise dance team director. Chrissy was known for her strength and ability to withstand unfavorable circumstances that would break most people. She battled numerous health issues, but still managed to be, uplifting, optimistic, loving and caring, and as independent as she could be given the circumstances. After years of fighting, Laura Christine Jenkins-Carter departed this life on Saturday September 30, 2017 at the University Of Maryland Shore Medical Center in Easton, MD. She is preceded in death by her mother, Alberta Jeanette Jenkins, and a brother, Frank Linwood Jenkins, Jr. She is survived by her husband, Timothy Carter, her one and only daughter, Taylor Neal, and two step-daughters Tynita Carter and Tahbrea Carter; two grandchildren, Izayleah and Za’nya, five step-grandchildren, Portia Carter, Passion Carter, Beonca Perry, Darian Perry, Patience Williams; her father Frank L. Jenkins Sr.; four brothers; Michael R. Jenkins (Theresa), Donovan E. Jenkins (Edwena), Jevon W. Jenkins (Jeanette), and David L. Jenkins; a special niece, Shawntia Andrews (Tyree), and a host of aunts and uncles, sisters-in-laws, brothers-in-laws, nieces and nephews, cousins, extended family and friends.

Laura Christine Jenkins-Carter was born on June 19, 1965 to Frank Linwood Jenkins Sr. and the late Alberta Jeanette Jenkins in Seaford, DE. To this union were born 6 children. She was the second oldest and the &#8220;only&#8221; girl of 5... View Obituary & Service Information

The family of Laura Christine Jenkins Carter created this Life Tributes page to make it easy to share your memories.