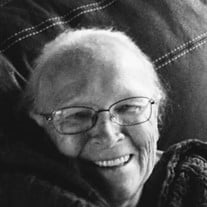 Lena E. Yutzy was born September 17, 1947 to the late Ralph and Katie (Kauffman) Yutzy of Plain City, Ohio. She decided early that she would need to make her own way in this world. She was truly a spirited and courageous individual who never let her 4-foot stature define or limit her. At 21, she left home for Louisville, Kentucky, where she discovered an incredible aptitude for managing a business, and for the rest of her interesting and variegated life, she continually proved herself an indispensable employee. In 1972, she moved to Pueblo, Colorado to live with her Aunt Ada Schlabach, Ada’s husband, Lee, and their three children. It was here that she found her “second family,” especially in her cousin Robyn, who has remained a soul sister throughout her life. She met some of her best and lifelong friends in Colorado, and continued to establish close friendships wherever she went. In 1980, she moved with her Uncle Lee and Aunt Ada to Phoenix, AZ. Around this time, with her usual optimism and determination, she solidly defeated breast cancer. In 1991, she moved to San Diego, California, and was quickly employed by a large internal medicine practice as their practice manager, where she remained for the rest of her working years. She was indispensable, and when she decided to retire, it took three people to do what she had done. All of her life, Lena enjoyed traveling to far and exciting places. She traveled to almost every continent, including Antarctica. Her many friends, relatives, and her Aunt Esther became her cohorts in adventure and exploration. For years she saved and planned for when she could retire and buy a motor home and go anywhere she wanted, and in 2013, she did just that. She sold or gave away (or stored) anything that wouldn’t fit into the motor home and set off on the greatest adventure of her life, crisscrossing the United States from California to Delaware to Florida to Arizona, then repeating the process all over again several times. She enjoyed doing this for six years, and then sold her motor home and began what we hoped would be a long time of “sharing her” as her plans were to spend summers in Delaware with her niece, Deborah, and her winters in Phoenix with her “sister-cousin,” Robyn. Unfortunately, it was not to be. Shortly after arriving in Delaware, her health declined and the journey was swift and short. On Tuesday, June 23rd, she slipped away from us. She was preceded in death by her mother, Katie Kauffman Yutzy in 1958, a brother, Joseph Yutzy, in 1981, her Father, Ralph, in 2010, and her step-mother, Sue Beachy Yutzy in 2013. She is survived by sisters, Rachel (Ivan) Zehr, of Waterloo, NY, and Ruth (Andrew) Zehr, of Croghan, NY. Also surviving is a brother, Daniel (Mary Ann Yoder) of Milford, DE, a sister-in-law, Ruby (Yutzy) Yoder, of Harrisonburg, VA, 19 nieces and nephews and nearly 70 grand nieces and nephews, their spouses, and one great grandnephew. Also surviving are numerous aunts, uncles, cousins, and special friends – David Ferraro, Father Louie Morrone, and John & Anne Nelson. Per her wishes, Lena’s ashes will be committed to the Atlantic and Pacific Oceans. A memorial service is planned for August 15 at United Bethel Mennonite Church, in Plain City, OH.

Lena E. Yutzy was born September 17, 1947 to the late Ralph and Katie (Kauffman) Yutzy of Plain City, Ohio. She decided early that she would need to make her own way in this world. She was truly a spirited and courageous individual who never... View Obituary & Service Information

The family of Lena E. Yutzy created this Life Tributes page to make it easy to share your memories.