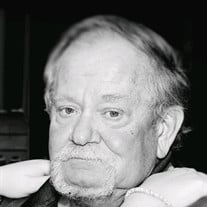 Leroy Oliver French of Greenwood passed away at P.R.M.C. in Salisbury, MD on Wednesday, January 22, 2020. He was 68 years old. Born in Wilmington, DE on September 8, 1951, he was the son of the late Albert M. and Jeanette Schuler French. Leroy began working at an early age, and soon found his calling in the carpentry field. He served in the Army during the Vietnam era. Following his release from active duty, he worked for Nanticoke Homes in Greenwood for more than 25 years. He went in business for himself independently building homes in the Delaware area. He then took a position as an Independent contractor building homes for Beracah Homes in Greenwood in 2006 where he remained until he was forced into retirement due to health issues in 2016. Leroy was a member of Faith Fellowship Church where he was a past Deacon. He enjoyed spending time with his grandchildren, great-grandson and family. He also loved to work on special projects in his home workshop. He enjoyed watching Jimmy Swaggart and One American News. He is survived by his wife of 50 years former Bonnie Lou Wood, whom he married on June 28, 1969, one daughter, Missy Toft of Greenwood, 3 grandchildren, David W. Wroten, Jr. and girlfriend Jessica of Seaford, Sierra Short and husband Robert of Laurel, and Nelson Toft, Jr. of Greenwood, one great-grandson Waylon Oliver Short, a son-in-law D. Wayne Wroten, Sr. of Seaford, DE, 2 brothers, Eddie French of Delmar, DE, Albert French (Mary) of Greenwood, DE and one sister Linda Steele. He is also survived by his long-time friend and companion “Tucker”. In addition to his parents, he was preceded in death by a daughter, Sandy Wroten, a brother, Phil Schuler and a sister, Cathy Steele. Funeral services will be held at Framptom Funeral Home, 216 N. Main St., Federalsburg, MD on Wednesday, January 29, 2020, at 12:00 pm. A viewing will be held at the funeral home from 11:00-12:00. Burial will be in Bloomery Cemetery. There will be a time of fellowship following the interment at the Hurlock Volunteer Fire Co. A covered dish or dessert would be appreciated. To share memories with the family, please visit www.framptom.com

Leroy Oliver French of Greenwood passed away at P.R.M.C. in Salisbury, MD on Wednesday, January 22, 2020. He was 68 years old. Born in Wilmington, DE on September 8, 1951, he was the son of the late Albert M. and Jeanette Schuler French.... View Obituary & Service Information

The family of Leroy Oliver French created this Life Tributes page to make it easy to share your memories.

Leroy Oliver French of Greenwood passed away at P.R.M.C. in Salisbury,...