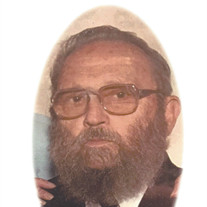 Lester Larkin Tipton of Laurel, DE, formerly of Federalsburg Maryland passed away on Tuesday, March 9, 2021 at Delmar Nursing and Rehabilitation Center in Delmar, DE. He was 94. He was born on November 20, 1926 in Federalsburg, Maryland the son of the late Milo P. Tipton and Flora H. Larkin Tipton. Lester enlisted in the United States Army in February of 1945. After serving in World War II, he earned the rank of Corporal and was honorably discharged in December of 1946. When he returned home, he married Shirley Wheatley Tipton in June of 1948 and they made their home in Federalsburg. She preceded him in death on November 6, 2007. Lester worked for Eastern Trailer Repair as a mechanic and later for the Town of Federalsburg as the Waste Water Supervisor. Aside from his career, he was a very talented carpenter and cabinet builder. He enjoyed building various mementos for his family and friends. He was a life-long member of the Federalsburg VFW Post #5246, the former Ruritan Clubs in Secretary and East New Market. He was a member of Faith Baptist Church in Salisbury where he attended with his family. He is survived by four sons: George Michael Tipton and his wife Gail of Laurel, DE, John Mark Tipton and his wife Lynn of Delaware City, DE, Richard Matthew Tipton of Federalsburg, MD, and Leslie Mitchell Tipton of Seaford, DE; 4 Grandchildren, 5 great-grandchildren, two nephews: Joe Tipton and his wife Monica of Glenburnie, MD, and Daniel Tipton and his wife Maureen of Severn, MD. In addition to his parents, he was preceded in death by a brother, Donald Tipton and a granddaughter Jennifer Tipton. A funeral service will be held on Monday, March 15, 2021 at 12:00 at the Framptom Funeral Home in Federalsburg. Burial will be private. The family will receive friends from 11:00 to 12:00 prior to the start of the service. Expressions of sympathy may be made in his memory to the Federalsburg VFW Post #5246, 2630 Rosser Road, Federalsburg, MD 21632. Share memories with the family at www.framptom.com

Lester Larkin Tipton of Laurel, DE, formerly of Federalsburg Maryland passed away on Tuesday, March 9, 2021 at Delmar Nursing and Rehabilitation Center in Delmar, DE. He was 94. He was born on November 20, 1926 in Federalsburg, Maryland the... View Obituary & Service Information

The family of Lester Larkin Tipton created this Life Tributes page to make it easy to share your memories.