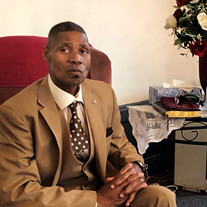 Bishop Lewis Richards, Jr., the son of the late Zackary and Mary Eaddy, was born on November 1, 1959 in Easton, MD. He departed his life on Sunday, April 8, 2018 at his home in Preston, MD. He was 58 years old. Lewis was a graduate of Colonel Richardson High School in 1979 and later received his Bachelor of Ministry from Christian World College of Theology in 2018 in Trappe, MD. Upon graduation from high school, he served his country by entering the United States Army and was honorably discharged in 1986. He was employed at Caroline County Public Schools for 6 years before becoming the assistant supervisor for Mentor Maryland Day Program at Mentor Maryland, Inc. Anyone that knew Lewis, knew that he loved working with children and cooking. He loved to cook big dinners and was determined to show anyone that he was the best cook in the kitchen. He was always willing to give the shirt off of his back to help anyone, especially the children in his local community and on his job. Lewis was a father to those who needed guidance the most. Lewis was preceded in death by his brother, Sylvester Richards. He leaves to cherish his lovely wife of 33 years, Brenda of Preston, MD, 6 children, Lewis III of Baltimore, MD, Lerell of New York, NY, La’el, Kayla, Kyle, and Nancy (Tyrelle) Beulah, all of Preston, MD, two brothers, Raymond Custis of Virginia, Zachary Eaddy, Jr. of Cambridge, MD, six sisters, Linda Skinner of Cambridge, MD, Gloria (Donald) Lawson, Bessie (Clifton) Eaddy, both of Federalsburg, MD, Felicia Walker-Dessam of Oakland Park, Florida, Joyce (Melvin) Trice of Dover, DE., and Carolyn “Peaches” Eaddy of Federalsburg, MD, 2 grandchildren, Destynie and Eternytie Beulah of Preston, MD, 2 godchildren, David Batson, Jr of New Castle, DE and Ashmeir Lake of Federalsburg, MD, and a host of aunts, uncles, nieces, nephews, cousins. Funeral services will be held on Saturday, April 14, 2018 at 12 noon at Union United Methodist Church in Federalsburg with Pastor Phyllis Duckery officiating. A visitation will be held from 10 a.m. - 12 noon at the church on Saturday. To share memories with the family please visit www.framptom.com.

Bishop Lewis Richards, Jr., the son of the late Zackary and Mary Eaddy, was born on November 1, 1959 in Easton, MD. He departed his life on Sunday, April 8, 2018 at his home in Preston, MD. He was 58 years old. Lewis was a graduate of Colonel... View Obituary & Service Information

The family of Lewis Richards created this Life Tributes page to make it easy to share your memories.

Bishop Lewis Richards, Jr., the son of the late Zackary and Mary...