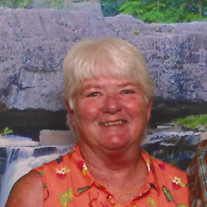 Linda Jane Eskridge, 66, of Seaford, Delaware unexpectedly passed away on Tuesday, August 27, 2019 at Nanticoke Memorial Hospital in Seaford, DE. She was the daughter of Ruth Riddle Mitchell and the late Donald C. Mitchell and the daughter in law of the late Bobbie Smith Eskridge and the late George W. Eskridge Jr. She was born April 6, 1953 in Seaford, Delaware where she attended the Seaford School District, playing field hockey during her high school years, then went on to get her Associate degree in Business at Del Tech. She married the love of her life Gordon W. Eskridge on February 1, 1975. They moved to South Florida in 1980 where they raised their two daughters and followed in her parents’ footsteps and began square dancing. They returned to Seaford in 2013. She happily retired early and enjoyed touring the U.S. in her RV and traveling worldwide with her husband, spending time with family and friends, spoiling her four grandsons and pampering her three dogs. She is survived by her husband, Gordon Eskridge, her children, Sloan McAfee (Brian), and Laura Johnson (Keith), mother, Ruth Mitchell, four grandsons, sister, Patricia Mitchell, brother, Boyd Mitchell, cousin and sister at heart, Pam Isaacs, step mother in law, Gladys Dalious, sister in law, Connie Ruf (Bill), brothers in law, Micki Eskridge (Mary), and George Eskridge (Debbie). A private service was held.

The family of Linda Jane Eskridge created this Life Tributes page to make it easy to share your memories.