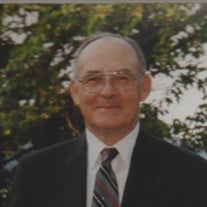 Lloyd Perry Hopkins, known to his friends as “Spook”, of Preston, passed away peacefully at home on October 13, 2018. He was 90. He was born in Preston, MD on November 1, 1927, the son of the late Charlie W. Hopkins and Lula E. Perry Hopkins. After graduating from Preston High School, Mr. Hopkins served two years in the Army. He retired from DuPont Company after 37 years. He loved his farm near Hog Creek and also worked in home improvements. Lloyd was an avid bluegrass fan. He could frequently be found camping at bluegrass festivals with his wife and friends. He was a member of Harmony United Methodist Church where he enjoyed playing his fiddle with the Praise Team. He was past-president of the Eastern Shore Bluegrass Association and Junior Order of Mechanics, as well as a life member of the VFW. One of the joys of his life was feeding and watching the deer and squirrels in his yard. He was preceded in death by his loving wife of 57 years, Margaret (Peggy) Leight Hopkins. He is survived by his children, Sandy Reynolds and husband, Ted, of Frederica, DE, Trish Hopkins and companion, Terry, of East New Market, Stephanie Milligan and husband, Art, of Denton, Claudia Eck and husband, Bob, of Wyoming, DE, Stanley Hopkins of Preston, Cindy Garrett, and husband, Sonny, of Houston, DE, and Marcy Larmore and husband, Tim, of Preston. Mr. Hopkins is also survived by 26 grandchildren, 47 great-grandchildren, and 4 great-great-grandchildren. He was also preceded in death by his siblings Raymond, Mildred, Edward, Roland, Edna, Claude, Leonard, and Calvin, a granddaughter, Tammy Jensen, and great-granddaughters, Brooke Davis and Abigail Jones. A funeral service will be held on Friday, October 19, 2018 at 3pm, at Harmony United Methodist Church with Reverend Carol Price officiating. Friends may call on the family from 1-3pm prior to the start of the service. Serving as pallbearers will be his grandsons, Jeremy Jensen, A.J. Milligan, Jr., John Watts, Jr., Brian Watts, Wade Hopkins, Davey Larmore, Jonathan Larmore, and Joshua Larmore. Honorary pallbearers are Jason and Joshua McGrath. In lieu of flowers, memorial contributions may be made to the Preston Volunteer Fire Company, P.O. Box 47, Preston, MD, 21655 or to Caroline County Humane Society, 4037 W. Belle St., Ridgely, MD 21660. Services entrusted to the Framptom Funeral Home, Federalsburg. Share memories with the family at www.framptom.com

The family of Lloyd Perry Hopkins created this Life Tributes page to make it easy to share your memories.

Lloyd Perry Hopkins, known to his friends as “Spook”, of Preston,...