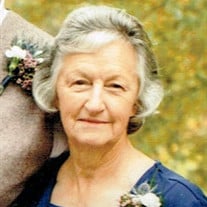 Lois Elizabeth (Hess) Smoker was welcomed to her Heavenly Home on Saturday, December 7, 2019 following a brief illness. She was 75. She was born on October 28, 1944 in Mount Joy, PA, the daughter of the late Henry L. Hess and Rhoda M. (Becker) Hess. She graduated from Elizabethtown High School in 1961. Afterwards, she spent some time in voluntary service in Immokalee, Florida. She also worked at Continental Press in Elizabethtown, PA. She was united in marriage to Leroy D. Smoker on December 5, 1964. They resided in Mississippi and Pennsylvania before moving to Greenwood, Delaware in 1974. Leroy preceded her in death on February 22, 2009 after 44 years of marriage. She was a faithful member of Greenwood Mennonite Church where she served in many capacities; which included teaching Sunday School for many years and also playing piano. She loved listening to music, singing, playing piano and attending bluegrass and Southern Gospel music concerts. Her children and grandchildren were important to her, and she did many special things for them and with them. She was a faithful friend; helping in practical ways whenever she was needed. She served as a caregiver to the elderly for many years, and her kindness was evident in the way she cared for her patients and their families. She is survived by five children: Darryl Smoker of Greenwood, Lisa Martin and her husband Verlin of Wellman, IA, Darlene Smoker of Mardela Springs, MD, David Smoker and his wife Laura of Greenwood, and Loretta Rakow and her husband Jeremy of Greenwood; 15 grandchildren, three siblings; James Hess of Harrisburg, PA, Shirley Hurst of Landisville, PA and Doris Rodriguez of Beatty, OR, a daughter-in-law Jane Duncan of Greenwood and son-in-law, David Struve of Mardela Springs, MD. Funeral services will be held on Saturday, December 14, 2019 at 1:00 at the Greenwood Mennonite Church. Burial will follow in the adjoining church cemetery. The family will receive friends at the church on Friday evening from 6:00 to 8:00 and one hour prior to the service on Saturday. In lieu of flowers, donations may be made to the Greenwood Mennonite Church Building Fund, 12525 Shawnee Road, Greenwood, DE 19950. Services entrusted to the Framptom Funeral Home - Fleischauer Chapel in Greenwood. Share memories with the family at www.framptom.com

Lois Elizabeth (Hess) Smoker was welcomed to her Heavenly Home on Saturday, December 7, 2019 following a brief illness. She was 75. She was born on October 28, 1944 in Mount Joy, PA, the daughter of the late Henry L. Hess and Rhoda M. (Becker)... View Obituary & Service Information

The family of Lois E. Smoker created this Life Tributes page to make it easy to share your memories.

Lois Elizabeth (Hess) Smoker was welcomed to her Heavenly Home...