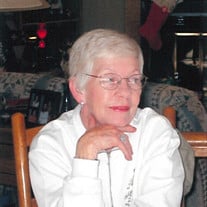 Lorraine R. Fairbank St. Michaels, MD- Lorraine R. “Rainey” Fairbank passed away peacefully at her home in St. Michaels on May 29, 2018. She was 86. The daughter of William Thomas Richardson, Sr. and Harriett Marshall Richardson, Rainey was born on February 11, 1932, in her grandmother’s house on Talbot St. in St. Michaels. Rainey graduated from St. Michaels High School in 1949. She then worked for several years at Firstman’s Sports Wear. In 1953, she married Robert H. Fairbank and in 1955 they built their home on Long Lane in Bentley Hay. When their first son was born she decided to stay at home to raise their children as opposed to having someone else do that for her. When they became teenagers she took a part-time job as secretary at Frederick Douglass Elementary School. A short time later she started sewing for a friend who was an artist. She made lady’s bags and wrap skirts and men’s ties, on which her friend painted waterfowl and other nature and nautical scenes. She also sold other items on consignment, such as crocheted “shrinks,” which were colorful pullover vests in a spiderweb or granny square type of design; halter tops; and visors and hats. Rainey enjoyed flower gardening, baking, working on jigsaw puzzles, and sewing. She was a gifted seamstress and also had a phenomenal talent for embroidery and crewelwork. She fashioned many crazy quilt pillows, wall hangings, and tablecloths out of velvet, satin, and silk, each creation covered in intricate decorative stitches and designs. Rainey also enjoyed spending time with her family and had a wonderful sense of humor. Rainey is survived by three children, Glenn, Eric, and Holly; three grandchildren, Ethan, Emily, and Ryan; two great-grandchildren, Kiersten and Kole; her sister, Edna Mae Messick; and eight nieces and nephews. She was preceded in death by her husband, Robert; and her brother, William Thomas “Sonny” Richardson, Jr. Services will be private. The family asks that memorial donations be made to Talbot Hospice, 586 Cynwood Drive, Easton, MD 21601-3805. To share memories with the family please visit www.framptom.com

The family of Lorraine R. Fairbank created this Life Tributes page to make it easy to share your memories.