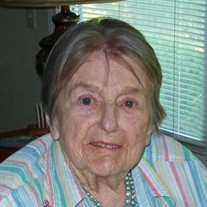 Mrs. Louise Caulk Behnen died peacefully at the age of 93 on Tuesday, September 11, 2018 at her residence in Wolf Creek Nursing Home in Holland, OH. Louise was born on May 24, 1925 in Federalsburg, MD, the daughter of the late J. Lentz and Maude Caulk. Louise married Bill, a sergeant in the US Air Force, in Texas on Dec 13, 1946. She accompanied him on his overseas assignments to Ankara, Turkey where Stephen was born and to Bangkok, Thailand where Michael was born. Alan was born in Ohio where Louise and Bill lived for many years. Louise loved Maryland and being close to the ocean. Louise and Bill vacationed frequently in Ocean City, MD where they owned an oceanfront condo for over 30 years. After Bill retired, they built a home in Salisbury, MD and spent even more time in Ocean City. Louise and Bill celebrated their 50th wedding anniversary before Bill’s untimely death in 1997. She will be remembered lovingly by her three sons Stephen (Mary) Behnen of Seattle, WA, Alan (Luann – deceased) Behnen of Holland, OH, and Michael (Anita) Behnen of Dayton, OH. Louise will also be fondly remembered by her four granddaughters Melissa Behnen, Sarah (Tim) Black, Erica (Chris) Aldrich, and Julia Behnen, her three great grandchildren Sloane, Finn, and Abel, and her sister, Hazel Welch of Front Royal, VA. She was preceded in death by her husband William Behnen of Salisbury, MD and her brother William Caulk of Federalsburg, MD. Friends and family are invited to share their memories at a gathering at Framptom Funeral Home at 216 N. Main Street in Federalsburg, MD at 1:00pm on Saturday, September 22. Immediately after at 2:30pm, a graveside service will be held at Hill Crest Cemetery, 3446 Laurel Grove Road, Federalsburg, MD, where Louise will be placed to rest next to her beloved husband. Memorial donations may be made either to Coastal Hospice & Palliative Care of Salisbury or to Hospice of Northwest Ohio.

Mrs. Louise Caulk Behnen died peacefully at the age of 93 on Tuesday, September 11, 2018 at her residence in Wolf Creek Nursing Home in Holland, OH. Louise was born on May 24, 1925 in Federalsburg, MD, the daughter of the late J. Lentz and... View Obituary & Service Information

The family of Louise Caulk Behnen created this Life Tributes page to make it easy to share your memories.

Mrs. Louise Caulk Behnen died peacefully at the age of 93 on...