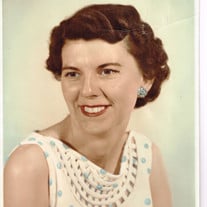 Louise W. Price of Wilmington passed away Monday, October 29, 2018 at Christiana Hospital surrounded by her family. She was 87. She was born on February 20, 1931 near Smithville, MD, the daughter of the late Minos Wright and Florence Cannon Wright. She was also preceded in death by her husbands, George William Neal and Joseph M. Price, Sr. Louise graduated from Bridgeville High School. She was a bookkeeper and worked a few hours a day until three weeks before her passing. She hated computers because they were only as good as the person sitting behind them. Louise from an early age was a member of Bloomery United Methodist Church near Smithville. She also had attended Newark United Methodist Church and Mt. Olivet United Methodist Church in Seaford. She lived to work and was fiercely independent. She was never wrong, even if she was wrong. Louise loved to mow her lawn at noon every Saturday and enjoyed doing so well in to her 80's. She truly loved animals. Louise enjoyed traveling in her earlier years and would truly venture out of her comfort zone. She always provided for her boys and loved them dearly. Louise is survived by three sons, Barry W. Neal and his wife, Elizabeth of Eagle River, Alaska, Terry J. Neal of Bear, DE, John D. Price of Wilmington, DE, two granddaughters, Heather McBride and her husband Matthew, and Jennifer Neal and her husband, Charles Benson, a great-grandchild expected to arrive in April 2019, two brothers, Robert Wright and his wife, Edith, Gene Wright and his wife, Beverly all of Seaford, DE. She was also preceded in death by a brother, Elwood Wright. A graveside service will be held on Sunday, November 4, 2018 at 1 p.m.at Bloomery Cemetery, 27997 Bloomery Road, Federalsburg, MD, with Pastor Marie Coulbourne officiating. In lieu of flowers donations can be made to Bridgeville Volunteer Fire Company, PO Box 727, Bridgeville, DE 19933. To share memories with the family please visit www.framptom.com.

Louise W. Price of Wilmington passed away Monday, October 29, 2018 at Christiana Hospital surrounded by her family. She was 87. She was born on February 20, 1931 near Smithville, MD, the daughter of the late Minos Wright and Florence Cannon... View Obituary & Service Information

The family of Louise W. Price created this Life Tributes page to make it easy to share your memories.