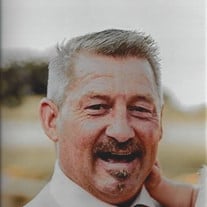 Lyle F Hamilton of Harrington, Delaware, passed away on August 24, 2020. He was 59. He was born on May 8, 1961 in McMinnville, Oregon, son of Larry and Lois Hamilton. He worked as a timber-faller with his brother, Larry Jr., and later operated Crosscut Logging after his brother’s passing. In 1985, he married Sydney Embleton of Greenwood, Delaware and in 1987, they moved to Delaware. Lyle learned the construction business and started his own company, Crosscut Construction. Some years later he transitioned into excavation and lot clearing, getting back to his roots as a timber-faller. Lyle worked hard and gained a reputation as a skilled equipment operator and trustworthy business man. Lyle was creative and artistic. He loved sketching out his next idea, milling the lumber, and making the dream come to life. He filled his spare time with projects around his home and property, including raising beef cattle. His love for his four daughters was apparent to all and expressed in words and actions. From the cashiers at Royal Farms, his neighbors, campfire buddies, or little widowed ladies at church, Lyle always took time to talk and show interest in others. He knew no strangers and made everyone feel noticed and loved. Lyle is survived by his wife, Sydney of 35 years, and their daughters, Chelsea (Michael) Steinsdoerfer; Taylor (Micah) Twedell; Lacey (Andy) Ra; Meghan (Jake) Landis; granddaughter Halle Steinsdoerfer and grandson Grayson Twedell. Lyle is also survived by his parents, Larry and Lois Hamilton; sisters Colleen Headings and Melody Myers, and his brothers, Loyal Hamilton, Lynn Hamilton and Leslie Good. A private viewing and graveside service will be held. Everyone is welcome to a Celebration of Life service at Greenwood Mennonite School, 12802 Mennonite School Road, Greenwood, DE at 3:00pm on Sunday, August 30, 2020. The family is inviting you to dress in your casual/work attire in honor of the hardworking man that Lyle was known to be. In lieu of flowers, the family asks you to consider buying a friend or stranger breakfast or coffee.

Lyle F Hamilton of Harrington, Delaware, passed away on August 24, 2020. He was 59. He was born on May 8, 1961 in McMinnville, Oregon, son of Larry and Lois Hamilton. He worked as a timber-faller with his brother, Larry Jr., and later operated... View Obituary & Service Information

The family of Lyle Frederick Hamilton created this Life Tributes page to make it easy to share your memories.

Lyle F Hamilton of Harrington, Delaware, passed away on August...