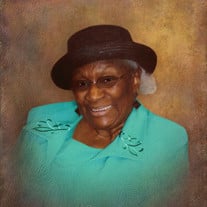 In loving memory of Mary Elizabeth Cannon-Wright-McCray departed this life on Monday, December 14, 2020 at Christiana Hospital in Newark, Delaware. She was 96 years young. Mary was born on May 12, 1924, to the late Edward Leon Cannon and Marion Cannon-Williams in Chester, Pennsylvania. She attended Elementary School from 1930 to 1937 and High School from 1937 to 1940. She was married to Willie Wright Sr. for 27 years. As a result of this union, 4 children were raised, Russell Cannon, Frances M. Jackson, Willie Wright Jr. and Henry Lee Wright. After divorcing Willie, on August 4, 1979, Mary married Tyrone McCray of Wilmington, Delaware. She was married to Tyrone for 30 years until his death in 2009. She worked for Leon Trivits from 11/12/1944 – 08/30/1969 as a Housekeeper, Seaford School District 01/06/1962 – 06/30/1969 as a Bus Driver, Carol Ann Dress Shop 10/10/1969 – 09/15/1977 as a Store Clerk, Sally Emery 12/03/1977 – 12/30/1978 as a Housekeeper, Mrs. Roger 09/12/1988 as Housekeeper, and finally for Elizabeth Scott 07/20/1979 – 05/01/1989 as a Housekeeper before retirement. Mary enjoyed shopping, cooking, reading her bible, family outings, sewing (slip covers, creating sheets and pillow cases out of feed bags), canning preserves (applesauce, pickled relish, peaches, etc), gardening and socializing. BUT, the main thing she will be remembered for is her appearance. From head to toe (hat, dress, nylons, jewelry and shoes), All colors had to match. She was always stunning when she left the house. You never knew until she stepped out the house or car what the colors were going to be that day. Later in life, she became a Jehovah Witness until her death. Mary is survived by her, Daughter - Frances Marie Wright Jackson two children, Thomas O. Jackson Jr. of Laurel, Delaware and Jilda C. Jackson of Wallingford, Pennsylvania; Daughter-in-Law - Georgia Ann Wright, 3 children, James Wright, Mary Frances Wright and Brenda Wright of Wilmington, Delaware; 4 additional Grandchildren (Henry Lee Wright Jr., Sarita Wright, Lucille Wright of Providence, Rhode Island and Avery Wright of Auburndale, Florida), and a host of Great Grand Children, Nieces, Nephews, Cousins, Family and Friends. Besides her Parents, she also preceded in death by Sister, Ida Cannon Dickerson, Husbands, Willie Wright Sr. and Tyrone McCray, 3 Sons, Russell Cannon, Willie Wright Jr. and Henry Lee Wright and 1 Grandson Willie Wright III. A funeral service will be held on Saturday, December 19, 2020, at 11am at the Framptom Funeral Home in Federalsburg, MD. A walk-through visitation will be held on Friday, December 18, 2020 from 6pm-8pm and from 10am-11am prior to the start of the service. Interment will be held at the Federal Hill Cemetery immediately following the service. Services entrusted to the Framptom Funeral Home. Share memories with the family at www.framptom.com.

In loving memory of Mary Elizabeth Cannon-Wright-McCray departed this life on Monday, December 14, 2020 at Christiana Hospital in Newark, Delaware. She was 96 years young. Mary was born on May 12, 1924, to the late Edward Leon Cannon and... View Obituary & Service Information

The family of Mary Elizabeth McCray created this Life Tributes page to make it easy to share your memories.