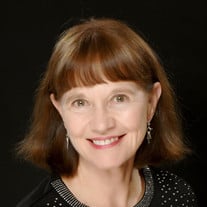 MaryLou Yopes Plutschak of Preston, Maryland, beloved wife of Glen E. Plutschak, passed away on October 2, 2020 after a private and courageous battle with breast cancer. She was born June 9, 1949 in Santa Ana, California to Mary Louise Leinberger Yopes and the late Paul Frederick Yopes. Her father was a Berkeley-trained engineer and geologist who traveled the world as a mining expert, settling back in the United States after meeting Mary Louise in Tustin, California in 1947. MaryLou excelled in school—especially in reading – graduating from Bethesda-Chevy Chase Senior High School in 1967 as an “A” student. She went on to earn a B.A. and M.A. in Psychology at the University of Maryland. In 1972, she began her career with the Division of Parole and Probation in Prince George’s County as a probation agent. MaryLou quickly rose through the ranks and was eventually promoted to Regional Administrator in charge of all operations and staff for the Eastern Shore of Maryland. She was known for her analytic skills and quiet, thoughtful approach to organizational issues, leading many strategic workgroups and committees. After 35 years of service she retired in 2008 with the highest commendations. After her first marriage ended, in 1995 MaryLou married Glen Plutschak from Preston, Maryland. Glen also worked as a parole and probation agent in MaryLou’s division before eventually being promoted to Regional Administrator for Central Maryland. Glen asked MaryLou to join him near his family farm in Preston and they made their home there. She grew to love the beauty of the Eastern Shore and its communities, and took special pleasure in tending the flowers, shrubs and vegetables in her extensive garden. MaryLou liked to read to Glen while traveling in the car -- and even as he drove combines and tractors. MaryLou and Glen loved to line dance, travel, and enjoyed cruises together in many parts of the world, often accompanied by family or friends. After marrying Glen, MaryLou soon became a doting step mother to Glen’s son Brad and his wife Heather, and later the beloved “Mimi” to their children Hayden and Molly. MaryLou was confirmed in Glen’s church, Immanuel Lutheran, and volunteered there as a member of Women in God’s Service (WINGS). She also played with the church hand bell ensemble. Having counseled adults as a parole and probation agent, after retirement MaryLou put her skills to work as a volunteer serving at-risk youth in foster care. As a Court Appointed Special Advocate (CASA) she worked with children who had experienced abuse or neglect, and made assessments and recommendations for the supervising court. She also assisted an older adolescent, teaching him how to drive and pass the motor vehicle test, as well as how to open and manage a bank account. In addition to Glen, Brad, Heather, Hayden and Molly, MaryLou is survived by her mother (Mary Yopes of Bethesda, Maryland), and three siblings and their spouses (Eric Yopes and Amelia Kaymen of San Francisco, California, Martha and Barry Lennon of Chevy Chase, Maryland, and Jennifer Angelo and Jack Mullen of Washington, D.C.). Funeral services will be held on Wednesday, October 7, 2020 at 1:00 pm at Immanuel Lutheran Church in Preston with Pastor David Casey-Motley officiating. Interment will follow at the Junior Order Cemetery in Preston. Pallbearers are: Eric Karge, Robbie Karge, Brad Plutschak, Hayden Plutschak, Eric Yopes and David Harper Sr. Friends may call at the church Tuesday from 6:00 pm to 8:00 pm and one hour prior to the service on Wednesday. For those unable to attend, please check the Immanuel Lutheran Church Preston Facebook page for possible video live streaming. The family would like to thank MaryLou’s doctors, nurses and staff in Easton and at the University of Maryland for their dedicated efforts on her behalf, and the nurses and social workers at Compass Regional Hospice for their sensitive and thoughtful services. In lieu of flowers, the family suggests donations to the MaryLou Plutschak Fund, c/o Immanuel Lutheran Church, 242 Main Street, Preston, Maryland 21655, or to CASA of Caroline County Inc., 114 Market Street, Suite 100, Denton, Maryland 21629.

The family of MaryLou Plutschak created this Life Tributes page to make it easy to share your memories.