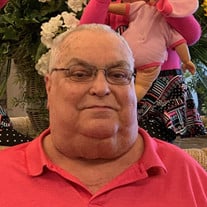 Michael A. Harding Michael Allen Harding, of Federalsburg, Maryland passed on while battling cancer for almost 20 years. He died on Wednesday August 19, 2020 at the age of 73. Born in Easton, Md. On January 29, 1947 he was the son of the late Percy M, and Doris Mae Covey Harding. Michael Harding graduated from Colonel Richardson high school in Federalsburg, Md. Upon his graduation his journey began in the trucking industry at Tri Gas & Oil as a truck driver. This quickly opened his eyes to the many other possibilities that were available in the industry. After his time with Tri Gas, Michael Harding enlisted in the Maryland National Guard where he proudly served for 6 years also transitioning to a new job with Crown Cork & Seal. He started from the ground up beginning as a truck driver and moving up into management where he continued for 38 years. Mike Harding was the oldest of 4 siblings, being Big brother to Jimmy Harding w wife Mary of Federalsburg; Susan Harding-Runnels w husband David of Federalsburg, and David N Harding who preceded him in death in 1991. In December of 1969 Michael Allen married his wife of 50 years; Ms. Cynthia Miller of Grifton, NC and both settled down in Federalsburg, Md to grow roots and start a family and in 1971 had their only son Robert Michael Harding “Little Mike”. This is where “Big Mike” (which he is now called) proudly began to take on his role as father, and start passing on his knowledge of the trucking industry. In 2006 Big Mike took his love for trucking and with the support of his wife Cindy and help from some knowledgeable colleagues, set out to start up his own company, and this is when birth of “East of the Bay” began. With an idea and a small loan, they started out with 1 truck and 3 trailers. They nurtured and put all they had into it and watched it blossom into the company it is today of over 20 trucks and 80 trailers along with a great hard-working staff of friends and family. Big Mike was a major contributor to the success of his company, giving insight and recommendations, till his very last breath where he passed away quietly in his home that he loved, overlooking at the fleet of trucks, with his loving niece Lori Schmick and other close family members along his bedside. Big Mike Harding leaves behind many fond memories, and stories to be told for years to come, but he also leaves behind many close friends and family to include. His dedicated and loving wife Cynthia Harding; Son Little Mike O’Harding with his family Maestro and two granddaughters who were his pride and joy, Ariana and Addyson whom he was so proud to be called their Pop-pop. Along with nieces and nephews; Nancy, Lori, Scott, Leslie, Katie and their families, he also leaves behind his very faithful and loyal companion who stayed beside him to the very end, his buddy Max, who will miss doing their many errands and rides to McDonalds and the bank or the hot dog stand in Preston. A celebration of life service will be held at the family business of East of the Bay at 4744 Preston, Road, Federalsburg on Saturday August 29, 2020 at 1:00PM. Burial Will be private. Memorial contribution can be made in his name to the Asthma and Allergy Center at the Johns Hopkins Bayview Medical Center or The Bay Hematology/Oncology Center in Easton, Md Arrangements are entrusted to Framptom Funeral Home by the Coales. 216 N. Main Street Federalsburg, Md. (www.framptom.com)

Michael A. Harding Michael Allen Harding, of Federalsburg, Maryland passed on while battling cancer for almost 20 years. He died on Wednesday August 19, 2020 at the age of 73. Born in Easton, Md. On January 29, 1947 he was the son of the... View Obituary & Service Information

The family of Michael Allen Harding created this Life Tributes page to make it easy to share your memories.