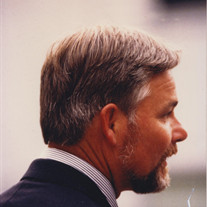 Michael R. Patrick of Easton passed away on Friday, December 21, 2018 at the Talbot Hospice House in Easton. He was 65. He was born on September 20, 1953 in Easton, the son of the late William “Pat” Patrick and Phyllis "Polly" Warner Patrick. Michael graduated from Easton High School with the class of 1971. One of his first jobs was at the Chesapeake Bay Maritime Museum in St. Michaels, refurbishing and refinishing boats. It was during this time that Michael helped resurrect the long held tradition of ringing the “Mechanics’ Bell” in St. Mary’s Square. He then spent a few years working in the home construction business and eventually became an independent paint contractor. He was as passionate about his work as he was about life’s simple pleasures. In his free time, Michael loved the outdoors: fishing, camping and the ocean. He would travel numerous times to Pocomoke River State Park, Deep Creek Lake, and the Catskill Mountains with his friends to relax and enjoy nature. Michael loved his family so much and looked forward to the backyard cookouts and the holiday gatherings. He enjoyed his music, the O’s, old TV reruns, steamed crabs & oysters, and those frequent road trips with his buddies. He also cherished the many friends he had in the Hyde Park community. Most of all, he treasured the time he shared with Polly, his niece: sleepovers, an afternoon at the movies or a day in Ocean City. He is survived by four siblings, Stanley Patrick and his wife Doreen of Easton, Stephen Patrick and his wife Nancy of Chestertown, Robin Patrick of Easton and Dawn Watts and her husband Gary of Carbondale, CO; three nieces: Laura "Scotti" LeCates and Polly LeCates of Easton, McKenna Watts of Los Angeles, CA and two nephews, Joseph LeCates of Easton and Keegan Watts of Los Angeles, CA. A sister, Patti Dental and an infant brother, Joseph “Joey”Patrick, preceded him in death. Michael and the family would like to extend their gratitude and heartfelt thanks to all those who were with Michael during his final journey; the doctors, nurses, care givers, and social workers; and especially the friends who were by his side, enriching his life and bringing him joy. The number of friends who held him dear are too many to name, their presence was testament to the wonderful person he was. A memorial service will be held on Friday, January 4, 2019 at Noon at Saint Marks United Methodist Church in Easton with Pastor Bobby Davis officiating. The family will receive friends from 11:00 to 12:00. Burial will be private. Expressions of sympathy may be made to the American Cancer Society, PO Box 22478, Oklahoma City, OK 73123 or to Talbot Hospice, 586 Cynwood Drive, Easton, MD 21601. Services entrusted to the Framptom Funeral Home in St. Michaels. Share memories with the family at www.framptom.com.

The family of Michael R. Patrick created this Life Tributes page to make it easy to share your memories.

Michael R. Patrick of Easton passed away on Friday, December...