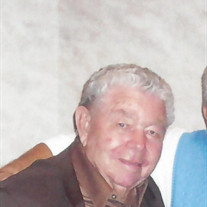 Naylor Robert Harrison, Jr. of Salisbury, MD passed away on Thursday, November 11, 2021 at Tidal Health Nanticoke in Seaford, DE. He was 91. He was born on April 15, 1930, the son of the late Naylor Robert Harrison, Sr. and Carrie (Wells) Harrison in Morristown, NJ. He married Bessie Stanley on June 14, 1948. He was a paving contractor for many years and he was an avid hunter and fisherman and enjoyed the outdoors. He enjoyed spending time with his family, especially his grandchildren and great-grandchildren. He is survived by his wife of 72 years; Bessie S. Harrison, children; Naylor R. Harrison, III (Sherrie), Molly Johnson, Hazel Harrison (Dickie), five grandchildren, 18 great-grandchildren, 6 great-great-grandchildren, and three sisters; Molly, Fay, and Cecil. He was preceded in death by a son-in-law; Danny Johnson, and two sisters; Daisy Stanley and Charlotte Harrison. A funeral service will be held at Framptom Funeral Home in Federalsburg, MD on Tuesday, November 16, 2021 at 11am with Pastor Pete Harrison officiating. Visitations will be held on Monday, November 15, 2021 from 6-8pm and Tuesday, 10-11am the day of the service. Interment will be held at the Wicomico Memorial Park in Salisbury, MD immediately following the funeral service.

The family of Naylor Robert Harrison, Jr. created this Life Tributes page to make it easy to share your memories.